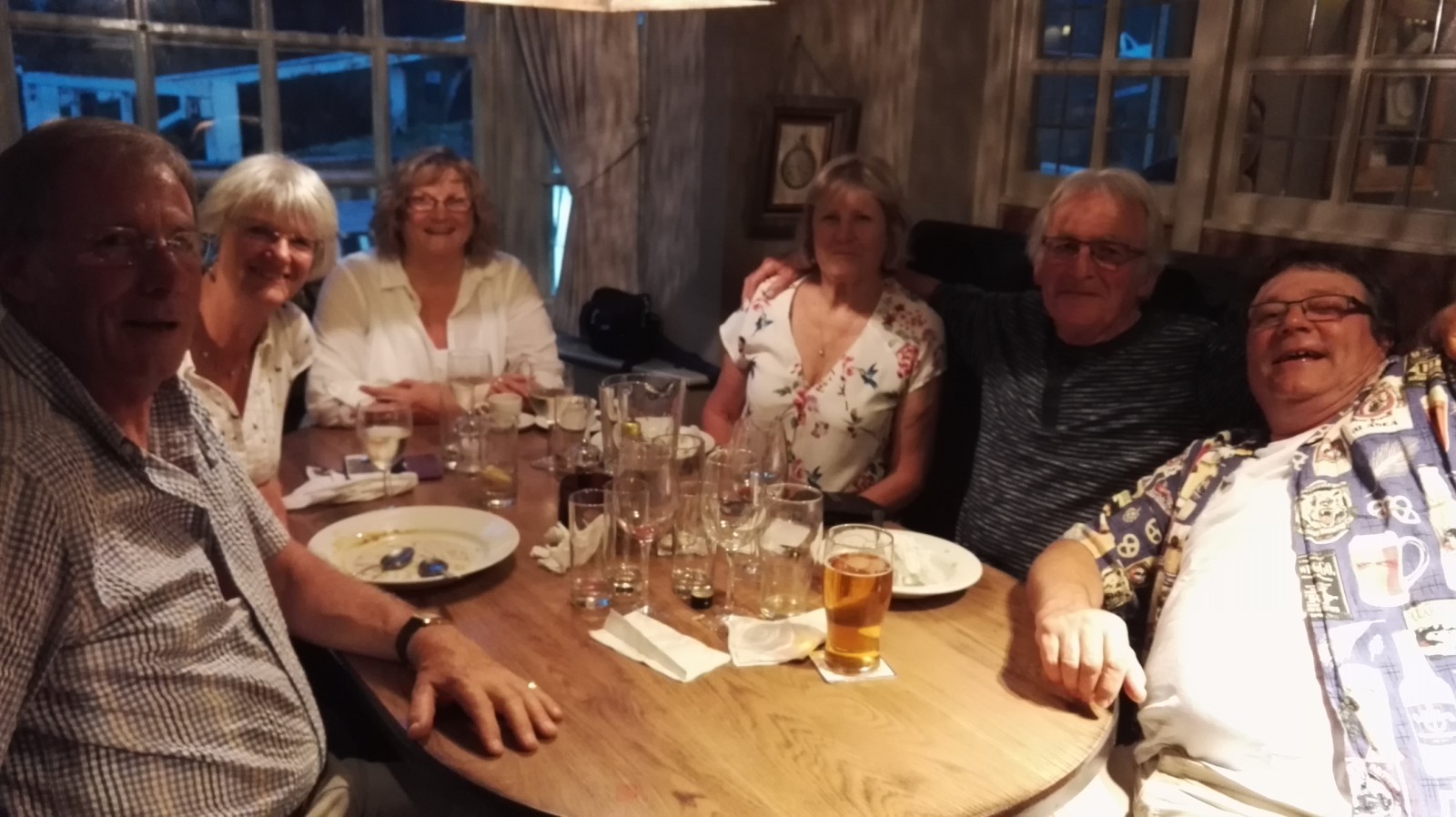 [vc_row][vc_column][vc_column_text]The weather is a common topic of conversation/complaint amongst the British and after a couple of years here we can see why. It is so totally unpredictable, other than on any given day you are likely to get almost anything. So we are intermittently rugged up, stripped off, sweltering under wet weather gear or cursing the wind. But it keeps life interesting….

After a couple of wet and rather miserable days, a lovely catch up with Jim and Chris’s daughter, Kim (Bron’s new adopted daughter – Kim wants an Australian passport!!), and disappointing service at The Globe Inn, we started moving in earnest last Friday 3rd June in a bid to reach Croxley before our need to catch the Underground to Northwick Park Hospital for Bob’s eye appointment on Monday. This was a trip of some 29 miles and 53 locks which we somehow managed to achieve in just 4 days – quite a success story. And we had to stop for supply shopping, diesel and water fill-ups, and refuse removal. We were very fortunate in finding pretty good moorings along the way and even had a great catch up with Jim and Chris’s friend Gilbert along the way. We were stopped a couple of times while C&RT staff refilled the low water in the pounds between locks (it seems some people either accidently or deliberately leave paddles or gates open overnight causing havoc for both moored boaters and those needing to use the locks), or cleaned the lock gates (not sure why this occurs during peak travelling times). But we made it, through some beautiful countryside, and found a spot in the sun at Croxley in time to share dinner aboard NB Sylph Sunday night.

We returned to NB Celtic Maid in good time and good spirits on Monday afternoon, following a rather successful appointment, and set off to catch up with NB Sylph who were car shuffling, shopping and laundering in nearby Rickmansworth.  We moored alongside them watched over by a boater who seemed a bit worried about our actions. We happened to be under a tree that several parrots had made their home, and both our boats became parrot toilets and rubbish bins overnight!!!! Thankfully good rains a couple of days later cleaned up most of the mess.

Tuesday’s goal was Cowley Lock and an eagerly anticipated dinner at The Malt Shovel with Jane and Michael, our friends from NB Moody Blues. Just as we reached the lock under a downpour and thunderstorm, Michael wandered along and  gave us a hand to moor in front of Moody Blues. They had just been through London both ways and we were keen to hear from them about their experiences on the Rivers Lee and Stort, which we hope to cruise sometime soon. Dinner, wine and company were all brilliant and we were laughing so hard at our (mis)adventures that we were crying. We managed to get back to our boats just before another rather loud and bright thunder/lightning/rain storm hit us. Cleaned Celtic Maid up a treat and sounded awesome!

We said our farewells to NB Moody Blues on Wednesday morning and made our way to Kensal Green – a trek of some 15 miles without locks. A stop for water and yet more shopping at Bull’s Bridge delayed us a little but we still wouldn’t have arrived without being hit by yet another rain deluge followed by bright sunshine once moored. What wasI saying about the weather.

Today, with Jim off to Devon for his medical appointment, Chris on NB Sylph led us to our current moorings at Westbourne Green – very close to Little Venice and the Paddington Basin that we hope to call home for a week very soon. But for now we are getting very excited to welcome guests aboard for the weekend Bob’s sister Judy and husband Ted from Canada!!!!  We can’t wait and hope we get a little sunshine for them.[/vc_column_text][/vc_column][/vc_row][vc_row][vc_column][vc_gmaps link=”#E-8_JTNDaWZyYW1lJTIwc3JjJTNEJTIyaHR0cHMlM0ElMkYlMkZ3d3cuZ29vZ2xlLmNvbSUyRm1hcHMlMkZlbWJlZCUzRnBiJTNEJTIxMW0xOCUyMTFtMTIlMjExbTMlMjExZDI0ODIuNTc4OTI1OTE1MTcyJTIxMmQtMC4yMDI5NjkzODM5MDA2Nzk5OCUyMTNkNTEuNTIwOTQwNjc5NjM3Mzg0JTIxMm0zJTIxMWYwJTIxMmYwJTIxM2YwJTIxM20yJTIxMWkxMDI0JTIxMmk3NjglMjE0ZjEzLjElMjEzbTMlMjExbTIlMjExczB4NDg3NjEwMWI0NDZhODUyYiUyNTNBMHg1ZWVhNDkxNWRlZDZhYTI4JTIxMnNXZXN0Ym91cm5lJTJCUGFyayUyQlN0YXRpb24lMjUyQyUyQkdyZWF0JTJCVyUyQlJkJTI1MkMlMkJMb25kb24lMkJXMTElMkIxQUIlMjE1ZTAlMjEzbTIlMjExc2VuJTIxMnN1ayUyMTR2MTQ2NTQ4ODYyOTcxNiUyMiUyMHdpZHRoJTNEJTIyNjAwJTIyJTIwaGVpZ2h0JTNEJTIyNDUwJTIyJTIwZnJhbWVib3JkZXIlM0QlMjIwJTIyJTIwc3R5bGUlM0QlMjJib3JkZXIlM0EwJTIyJTIwYWxsb3dmdWxsc2NyZWVuJTNFJTNDJTJGaWZyYW1lJTNF”][/vc_column][/vc_row]