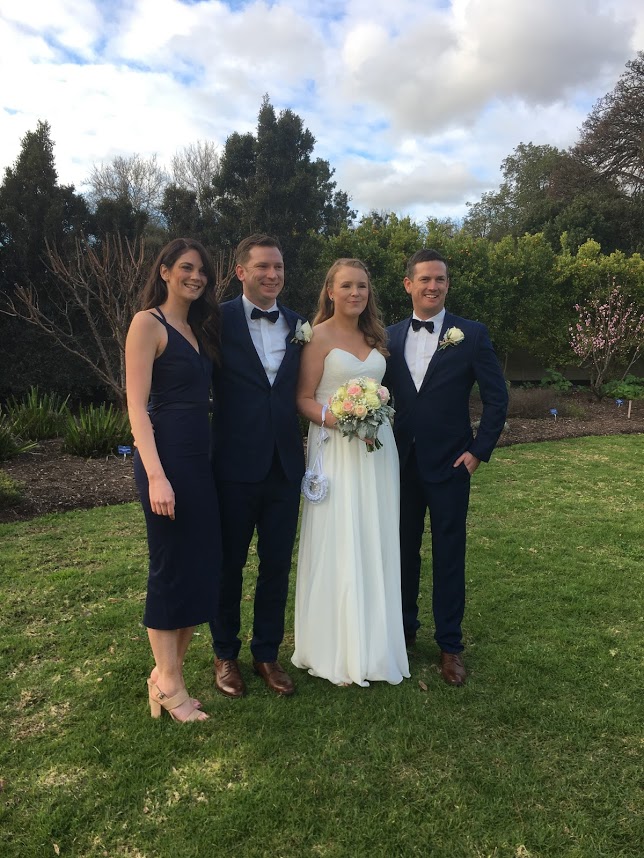 [vc_row][vc_column][vc_column_text]After our long and very tiring journey from Phuket through Singapore and Melbourne, we finally stepped off the plane in Adelaide to be greeted by three of our children – Corey, Claire and Thaao. Just couldn’t hug them all enough. And it wasn’t long before we got our first surprise of the trip. Our cousins from Phillip Island, Victoria – Denise and Mark – were also there having arrived early for Corey and Holly’s wedding to surprise us!!

We all went off to Argo cafe on The Parade at Norwood for a very delicious and healthy lunch (much needed) and a catch up with family. And this is when we got the next surprise. Grandchild number 6 is expected early next year by Claire and Russell – very happy news for us all.

Our base for this trip was at Thaao and Todd’s at Rostrevor although we did endeavour to spend as much time as possible with each of our children and grandchildren. We unpacked and caught up with Denise and Mark’s news and had a great dinner with them and Thaao and Todd before retiring early and getting some very much needed sleep – we had left Phuket very early Tuesday morning and finally got some sleep Wednesday night.

On Thursday morning Bron went off to work with Thaao to meet up and spend the day with Corey before his nuptials on Saturday. These opportunities to have one on one time with our children were highly valued highlights of our visit. The day was quiet but just perfect and ended with dinner with friends of Corey and Holly who had arrived for the wedding, Holly’s sister and two adorable nieces and Corey’s Auntie Anne. Such a great night meeting new people and catching up with old friends.

Friday morning started with Bronma duties as Tarik arrived early with Piper and Harper. He was busy polishing his much loved Holden in readiness for it to be driven by his dad on Saturday as the wedding car. On arrival, all were a bit stunned to see the welcoming party of a koala just outside the front door!  Denise and Bron had a great time with the girls as they unpacked and enjoyed their gifts from England – clothes, books, and colouring in materials. Meanwhile, Bob, Mark and Todd were off attending to some haircuts and shopping. Denise and Bron had a late morning nail appointment with Holly, her mother Eileen and her bridesmaids, followed by a hair appointment for Bron. This gave us the opportunity to experience how fast and easy using Uber taxis is in Adelaide now – very impressed.

Saturday – the wedding day – dawned full of promise. Cold but the hope of some sunshine later in the day. The early excitement of the day was the news that Denise and Mark’s daughter Danni and Blake, along with their son Kai had welcomed baby Nash into the world. In just a few short days we had so much to celebrate!!

The wedding was held in the Adelaide Botanic Gardens and was absolutely beautiful. Matched by the whole bridal party. Bron of course cried and it was wonderful to see the support of both Holly and Corey’s family and friends on their very important day. The reception at the Lion Hotel in North Adelaide was perfect as all guests got to mingle and enjoy delicious food, varied music and the company of a special group of people. We felt honoured and privileged to be a part of their day.

Of course, it was a sluggish start to Sunday as no-one had got to bed very early!! We decided to make it an easy day but prepared a surprise birthday dinner for Claire at Thaao and Todd’s because she had a busy work schedule that week and we were unable to meet her on her actual birthday. Fergus was a little reticent to be sociable when he first arrived given that he had only just woken up from sleeping in the car and was unfamiliar with us all. But he soon warmed up and by the time Bron and Thaao returned from a flying visit to Corey and Holly’s to pick up Corey’s car to use while they went on their honeymoon, he owned the place!!!

After another great meal (Bob and Todd worked both collaboratively and competitively to deliver some amazing meals while we were there – none disappointed!!), we shared our usual birthday cake (Vienetta ice cream with fresh berries and of course candles) giving Fergus the chance to help his mum blow out the candles.

Thaao had another few days off with us so the following day she took us all (Denise, Mark, Bob and Bron) into the Adelaide Hills for a drive to have lunch at the Prancing Pony brewery (yum!!) and then a visit to Beerenberg strawberry farm. We ended the day wandering through Hahndorf and then back home. On Tuesday she took us all into the city of Adelaide for a ride along the River Torrens on the famous Popeye boats, lunch in North Adelaide and then a wander through the fabulous Adelaide Oval. This is an amazing place to watch a game of cricket or our beloved Adelaide Crows beat their opponents in an Australian Rules football match. Apparently, music concerts here are pretty damn good too!

All too soon Wednesday arrived and Denise and Mark left to return home. We just loved our week with them and never get enough time together. Maybe one day they will come over to visit us aboard Celtic Maid.

On Thursday we headed up to the Riverland to stay with Bob’s daughter, Kathryn, and children Ben and Matthew. Her husband Kym was working away but we did get to see him on a subsequent visit. They had made a fantastic space for us in their camper trailer inside the shed with Bob having the run of the Man Cave nearby. With a fridge, fireplace, comfy chair, and TV what more could he ask for? Except perhaps his grandsons coming in and playing games on the XBox with him!!

Meanwhile, Bron got Bronma duties for a whole day as both Terri and Tarik worked. It went very well apart from failing to put Harper to bed for her afternoon nap! Oh well, she probably had an early night for them! It was a great day but very exhausting. By this time Bron had managed to develop a cold (quite a few people from the wedding did) which stayed with her throughout the trip.

Saturday morning is swimming morning for the girls at the Recreation Centre in Renmark. Bron’s job was to mind the clothes and take photos. Not hard. She is so proud of how well the girls are learning to swim and they get extra practice over summer in their other grandparent’s pool – lucky poppets!

After swimming we had a look around Renmark, visited the playground and had lunch at the historic Renmark Hotel (Tarik is a proud Board member of this institution!). On return to Kathryn’s, Bob and Matthew proudly showed off the completed roof of Matthew’s cubby house that they had been working on during the day.

We had a few more days enjoying our Riverland children and grandchildren before returning to Adelaide to attend the official nuptials of our friends Monica and Jo. It was another gorgeous ceremony, this time shared with their witnesses, Morag (Monica’s sister) and Trevor, and three other very close friends. We celebrated at Mrs. Q’s Asian Kitchen on Gouger Street in the city before Thaao lovingly came out late to drive us home. Celebrations were getting to be exhausting!!!!

Corey and Holly arrived back from their honeymoon that same day so the next day we descended upon them for a little time together. They were tired but very happy and pleased to have some of Bob’s cooking. We had a visit to Adelaide Central Markets to get in supplies and then he cooked up a storm!!! On the Saturday Holly took Bob to get his eyes tested for new glasses as the specialists at Moorfields Eye Hospital in London had agreed that his left eye had probably settled to the point where new glasses were required. Holly was under strict instructions to confiscate his old ones (which predated the ye issues!) immediately on picking up the new glasses a week or so later. She did it well and he has not looked back.

During our time with them, we also had the privilege of having her nieces, Sophie and Grace, spend the night. Corey and Holly are indeed blessed to have four amazing nieces as are those girls to have Uncle Corey and Aunty Holly in their lives.

On Sunday afternoon they drove us down to Semaphore for a drink in the pub, walk along the pier and ice cream – just the relaxation in the sun that we all needed.

On Monday we returned to Thaao and Todd’s. Bob was off for a few days with Claire, Russell, and Fergus in their new house at Flagstaff Hill while Bron and Thaao went to the Gold Coast on a special mission. Thaao and Todd are getting married early in 2019 and as this was the only opportunity for Bron to assist in any of the planning. Thaao organised for them to visit some bridal salons and have a couple of days of mother and daughter time. It was a wonderful time eating, trying on wedding gowns and just hanging out.

Upon return from this trip, we went again to the Riverland for Matthew’s birthday weekend – 10 is a big number!! He had some friends around on the Saturday afternoon followed by more family and friends for dinner. On Sunday Kathryn and Kym hosted a traditional family breakfast BBQ cooked by Bob and shared with Tarik, Terri and the girls and Corey and Holly who drove up from Adelaide. We all had a great time but seeing Corey and Tarik on the trampoline together brought back memories of their childhood. No injuries thankfully!!

We returned back to Adelaide on Monday ready to share Thaao’s birthday celebrations on Tuesday. She decided to climb Mt Lofty followed by lunch again at Argo and a massage, then dinner with extended family. Bob went with her on the climb whilst Bron drove up to meet them at the summit and then back to pick them up at the base. Thaao was up in an hour, Bob in 90 minutes. She was down in about 40 minutes but Bob took nearly 2 hours as he was busy chatting to other climbers and taking photos. Therefore we missed lunch but got Thaao to her massage almost on time.

Dinner was lovely and it was great to see the family together again but sad to say farewell at the end of the night. By the next morning, Bron was ordered to have bed rest by her daughter as the cold had steadily got worse and the long flight home was less than 4 days away. We, therefore, missed catching up with Monica and Jo again and neither did we get back to see Corey and Holly again. But the bed rest worked a treat and by Sunday night we were packed and ready to say farewell again to our family and leave Adelaide to return to Celtic Maid.