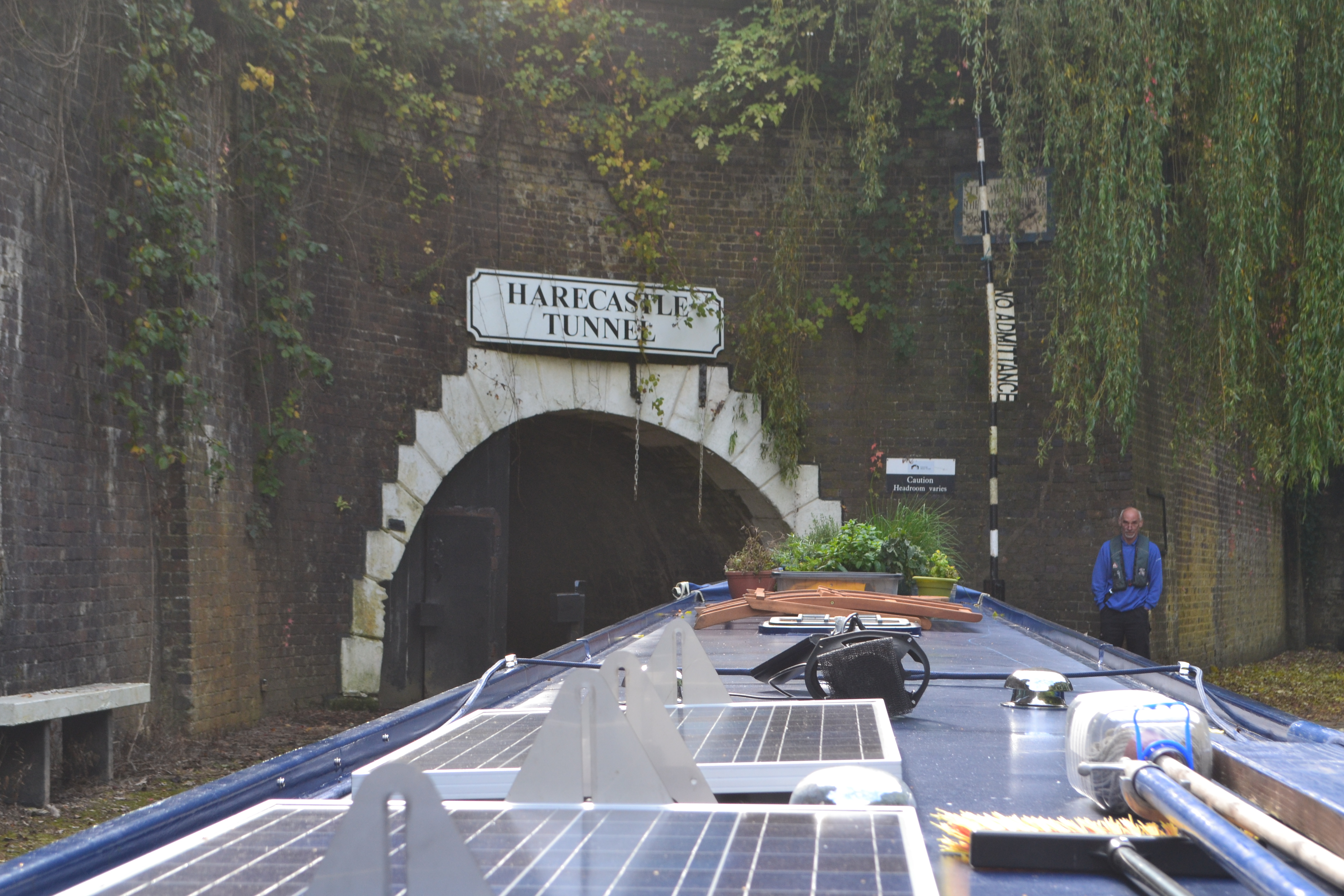 [vc_row][vc_column][vc_column_text]You will all no doubt be pleased to know that we made it through the Harecastle Tunnel without incident or haunting!!! So after a short cruise along the Trent and Mersey Canal again we turned off at Etruria Junction to explore the Caldon and Leek Canals. We were just starting to get smug about getting through Stoke-on-Trent on a Sunday afternoon without incident when near Milton some under-stimulated young people decided to practice their already very good throwing skills by stoning us from a bridge. While the small rocks hailed down, Bob kept a firm hand on the tiller and Bron retreated to the relative safety of the cabin. We were lucky in only getting one small paint chip and no broken windows. But learnt a valuable lesson in timing. Never go through cities or potentially rough areas during times bored young people are likely to be out and about,

The Caldon Canal, including the Leek arm, is very picturesque particularly the autumn foliage. It is often narrow, shallow and relatively isolated with minimal internet, phone and television coverage. So our few days spent there cruising tended to be relaxed, unhurried and peaceful. The towpath is in very good condition for much of it and the services facilities (where available) in excellent condition. Add a couple of excellent pubs and trouble free locks and its pretty much paradise. Rather overgrown in parts makes finding moorings difficult but there are plenty of spots that have been cleared and have mooring rings so we never had a problem with that.

Whilst there our very good friend Max came to visit and sorted one of our unfinished tasks – a bead of sealant in the bathroom where the shower alcove meets the floor tiles. It has always looked unfinished and provided a dust and water trap –  but not any more!!! Happy and thankful Bron for this piece of work.

We managed to travel almost the full length of each canal but made the sensible decision to not go through either the Leek or Froghall tunnels as they are somewhat small and the canal termination points can be reached easily by foot reducing risk of boat damage.So after a restful few days we arose in good time on Friday morning to get through the outskirts of Stoke-on-Trent early enough to avoid a repeat performance.

Our goal was to get back onto the Trent and Mersey Canal and progress towards moorings in Stone in readiness for yet another trip to London on Monday for the eye hospital. We made it by late afternoon to a good spot just opposite the Wedgewood Pottery factory thinking that we only had a short hop on Sunday into Stone. Alas at our last of 4 locks (we thought that and as many miles would be it for the day!) we were informed by a boater heading up the locks that there was a working boat (diesel, coal, rope merchants mainly) rally in Stone and they were moored 2 and 3 abreast right where we were planning to moor.

So after Bron scouted forward we descended  a further 3 locks and 1 1/2 miles and were lucky to find a spot very close to the town centre and much needed supply shopping.

With supplies for a couple of days we made plans to get to London (outcome of appointment was mixed – the eye is healing but slowly so we still need medications for a while longer – follow ups at the end of November) and catch up with a bit of administration. Little things like doctor appointments, hair cuts, bill paying, finding winter moorings, catching up with family and friends both in Australia and here in England, and still more supply gathering have filled in our time since then. With a spell of bad weather due to hit overnight it looks at this stage as if we will not be off until Thursday when we will try for Great Haywood – where we spent considerable time over winter earlier this year.

Lots of new photos in the gallery including one of our new vac (or hoover as they are called here in the UK!!) by popular request. Check them out and let us know what you think.[/vc_column_text][/vc_column][/vc_row][vc_row][vc_column][vc_gmaps link=”#E-8_JTNDaWZyYW1lJTIwc3JjJTNEJTIyaHR0cHMlM0ElMkYlMkZ3d3cuZ29vZ2xlLmNvbSUyRm1hcHMlMkZlbWJlZCUzRnBiJTNEJTIxMW0xOCUyMTFtMTIlMjExbTMlMjExZDM4MzcwLjE3MzYzNzI1NzM4JTIxMmQtMi4xMzk3MDYzMDE1MDY5MTQ0JTIxM2Q1My4wNTM4NjY0MDkxMTY1MyUyMTJtMyUyMTFmMCUyMTJmMCUyMTNmMCUyMTNtMiUyMTFpMTAyNCUyMTJpNzY4JTIxNGYxMy4xJTIxM20zJTIxMW0yJTIxMXMweDQ4N2E0MTgzYTJhMmNlZjclMjUzQTB4ZTU5MDA1Y2UyYzU5ZDlhMiUyMTJzQ2FsZG9uJTJCQ2FuYWwlMjE1ZTAlMjEzbTIlMjExc2VuJTIxMnNhdSUyMTR2MTQ1ODY0MjQxODI1MSUyMiUyMHdpZHRoJTNEJTIyNjAwJTIyJTIwaGVpZ2h0JTNEJTIyNDUwJTIyJTIwZnJhbWVib3JkZXIlM0QlMjIwJTIyJTIwc3R5bGUlM0QlMjJib3JkZXIlM0EwJTIyJTIwYWxsb3dmdWxsc2NyZWVuJTNFJTNDJTJGaWZyYW1lJTNF”][/vc_column][/vc_row]