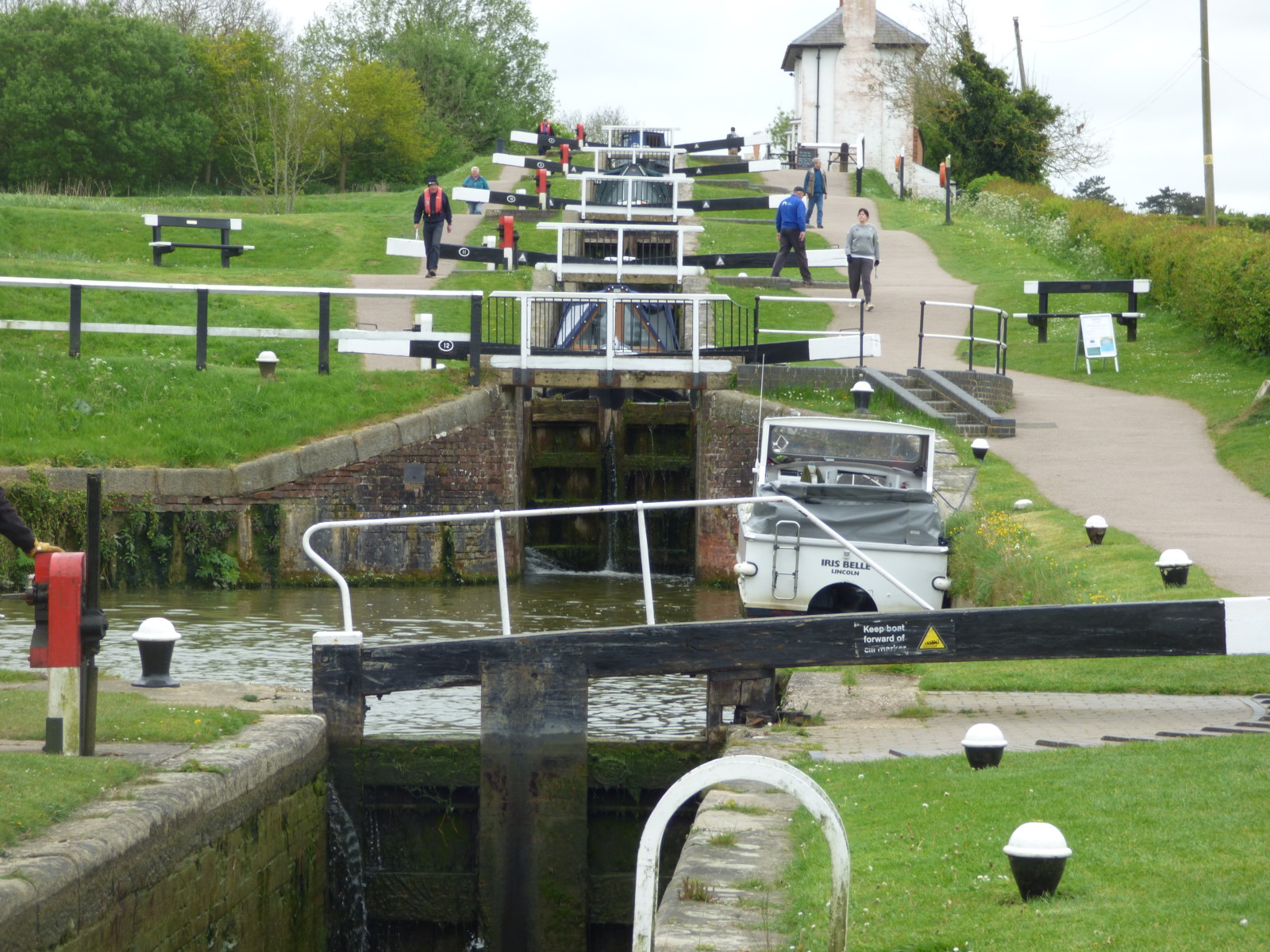 After celebrating Bob’s birthday in Loughborough, we headed south towards Leicester, which involves sections of both the River Soar and canal making up the Leicester Navigation. We have really enjoyed the rural parts of the Soar and were surprised by how picturesque it all was. Arriving in Leicester is slightly different, but there is still enough rurality about the Watermead Country Park  and various gardens to camouflage the buildings, graffiti and polluted waterway.

However we had convenient moorings at Friars Mill with close proximity to the city’s shopping district and very good security. Shame about the pigeon invasion and construction works nearby!!!! Despite warnings from other boaters that the southern section of Leicester should be traversed as quickly as possible, we found it rather beautiful. But we had carefully chosen to leave on a Monday morning rather than travelling over a weekend – a mistake we did not care to repeat from an earlier experience with bored youth using Celtic Maid as target practice for their rock throwing!!

We were fortunate in finding a couple of lovely rural moorings between Leicester and Market Harborough, where we would have liked to tarry had we not set our sights on tackling the Rivers Nene and Great Ouse this summer.

On arrival in Market Harborough we found secure moorings and then left to visit Julie and Phil in Essex. A couple of factors led to us staying there a few days longer than anticipated but we had an enjoyable catch-up and returned to find Celtic Maid waiting for us – although in great need of a good wash as a result of being moored under trees for a week!

Upon leaving Market Harborough we rejoined the Grand Union Canal and tackled the Foxton Locks. These consist of two staircases of 5 locks each and take about an hour to get through. Because of the complexity in water management there are Canal and River Trust volunteers on hand to assist, making sure that no-one starts at the other end when boats are already on the flight (there is nowhere to pass), and that the water is managed safely. We did have to wait  about an hour and a half for 6 boats to descend before we could start our ascen,t but the ice cream at the top was well worth the wait. This is a popular spot for visitors and on a beautiful day like we had, the towpath was full of gongoozlers.

The last section before we reached the end of the Leicester Ring involved 2 tunnels of less than a mile each which were achieved without incident, thankfully, although one oncoming canal boat was fitted with headlights that would do an Aussie spotlighter proud – but blinded Bob! We did do a detour down the Welford Arm to meet up with friends Jane and Tim (who are Norfolk Broads boating friends of Julie and Phil) in the historic Wharf Inn. A great night was had by all and we were thankful that they were able to catch up with us.

We had been in frequent contact during this time with Jane and Michael from NB Moody Blues, hoping to catch up with them before they got too far ahead of us on the River Nene. Luck was on our side – if not theirs – and they were delayed slightly in Braunston for some repair work but arrived at Norton Junction just as we were about to head down the Buckby Lock Flight. After a brief chat, NB Sylph and NB Celtic Maid headed on and they caught up with us the next day at a great mooring near Weedon Bec. This gave us time to stop off at Whilton to get new brighter interior lights for Celtic Maid and lots of plants for Sylph. Happiness all round!!!!

Once NB Moody Blues caught up with us we celebrated Australian Mother’s Day with a picnic party on the towpath in the sun – just the loveliest day.

Our last leg of this journey was to descend the 17 locks into Northampton before locking down onto the River Nene for our next big adventure. This was achieved in rather efficient time with only a few scary moments when the water from the pond above the lock that Bron was skippering Celtic Maid through, started flooding over the top gates. Some rather loud shouting alerted Bob to the requirement to shut down the lock above and let us progress a couple of locks ahead to save a repeat performance. All safe and well in the end.

Once in Northampton the three men took a day to retrieve Jim and Chris’s car while their wives worked diligently on their respective boats and avoided the deluge that fell from the sky. A planned women only lunch was postponed to another time. Of more importance was getting our laptop back in action following a Windows failure a few days before. It seems we have had some success in this and have lots of body parts crossed to avoid a repeat performance.

After stocking up and cleaning up we were ready by the 19th May to venture onto the River Nene – NB Moody Blues had set off the previous day as forward scouts. Let the adventure begin…..[/vc_column_text][/vc_column][/vc_row][vc_row][vc_column][vc_gmaps link=”#E-8_JTNDaWZyYW1lJTIwc3JjJTNEJTIyaHR0cHMlM0ElMkYlMkZ3d3cuZ29vZ2xlLmNvbSUyRm1hcHMlMkZlbWJlZCUzRnBiJTNEJTIxMW0xOCUyMTFtMTIlMjExbTMlMjExZDk3MTUuMTIwNzk2MDY4ODM3JTIxMmQtMC45OTEwNzY3MzIzMTA1ODM5JTIxM2Q1Mi41MDEyMTgyNDUzNzM3MzUlMjEybTMlMjExZjAlMjEyZjAlMjEzZjAlMjEzbTIlMjExaTEwMjQlMjEyaTc2OCUyMTRmMTMuMSUyMTNtMyUyMTFtMiUyMTFzMHg0ODc3NmZkOThiYThiNWYxJTI1M0EweGM5MWY5ODY4MGUxYTliMDIlMjEyc0ZveHRvbiUyQkxvY2tzJTIxNWUwJTIxM20yJTIxMXNlbiUyMTJzdWslMjE0djE0OTU1NTA3ODgzNTUlMjIlMjB3aWR0aCUzRCUyMjYwMCUyMiUyMGhlaWdodCUzRCUyMjQ1MCUyMiUyMGZyYW1lYm9yZGVyJTNEJTIyMCUyMiUyMHN0eWxlJTNEJTIyYm9yZGVyJTNBMCUyMiUyMGFsbG93ZnVsbHNjcmVlbiUzRSUzQyUyRmlmcmFtZSUzRQ==”][/vc_column][/vc_row]