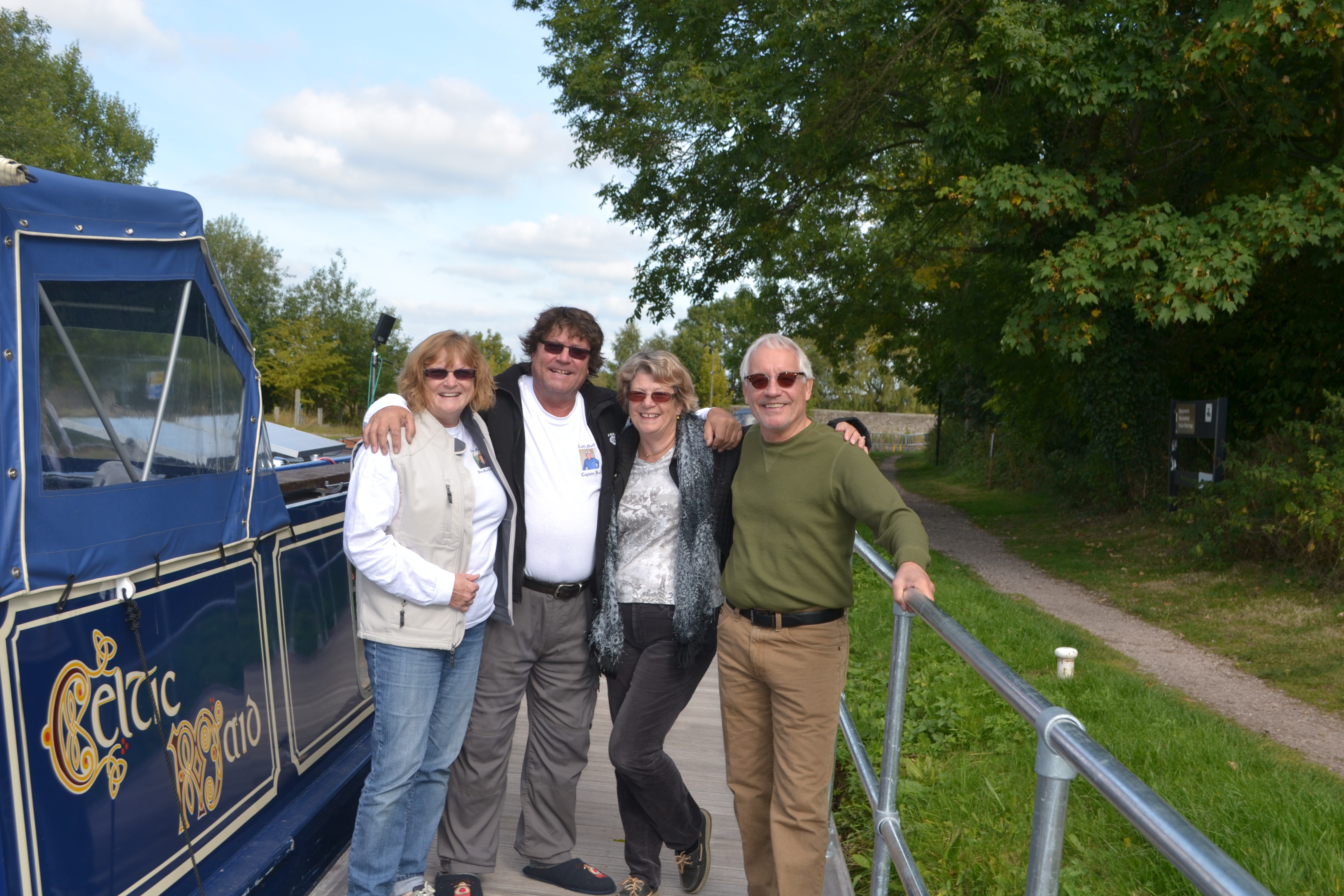 [vc_row][vc_column][vc_column_text]It has been another couple of very successful weeks for us with a bit of emotion thrown in. We have just hosted Bob’s sister, Judy, and her husband Ted who flew in from Burlington, Canada, for the last six days. We said a tearful farewell to Julia and Malcolm on NB Figment after spending the last four months as cruising companions. We caught up with friends Michael and Kendra from Port Townsend USA and Chris and Sue from Edgware. And we have had significant success in the treatment of Bob’s eye condition.

After a great week with Julie and Phil on board we left our moorings in Middlewich on Monday 14th September to cruise the 13 miles and 34 locks to Harding’s Wood Junction in Kidsgrove where we started our summer cruising with NB Figment at the end of May. Having done this section 4 months ago we were well prepared for all the locks and managed the section very well. We were fortunate to secure excellent moorings between locks 41 and 42 away from the traffic but within easy walking distance of the shopping, train station and CRT facilities. Malcolm and Julia had kindly offered to watch over Celtic Maid while we travelled to London to have Bob’s long awaited cataract operation performed  so we set off on Thursday morning by train to make it all happen.

We spent Thursday afternoon in Harrow near the hospital with Chris and Sue who thankfully kept us calm and relaxed as we prepared for the surgery. Our hotel was only about a 15 minute walk from the hospital so we made our 7.30am appointment in good time and settled in to wait. Bob was again the last on the surgery list but we were still back in the hotel room by 1.30pm and he was feeling good about the experience.

Chris and Sue brought Michael and Kendra (fresh from their boat cruise on rivers and canals in France) over to Harrow for dinner that night and it was great to have a good catch up even though the pub was very noisy with Rugby World Cup enthusiasts! We had a fairly early night and got some much needed rest after some very early starts over the last few days.

It was with amazing relief that once the dressing was removed from Bob’s eye the following morning he could at last see from it – after about 12 months of practically no vision at all. We were both so happy and very keen to get on with life. This is a milestone for us – a serious eye condition is not what you plan for when creating the reality from the dream of narrowboat cruising around England.

With this great start we set off to catch the required trains to visit Julie and Phil in Maldon for the weekend for R&R in anticipation of a return visit to hospital for a check up on Monday. They collected us from the station in Witham and although we had only seen them a week before it was brilliant to be with them again and share the happy news. And we celebrated by going to lunch at the Maldon Smokehouse – absolutely scrumptious. We had to take a rest before going out with Julie’s parents, Joy and John, for another great dinner at the Hurdlemakers Arms. All we seem to do is eat!!!!!

And then to wake up to a stunning full English breakfast cooked by Phil and amazing huge roast dinner….. Truly brilliant. Just a wonderful relaxing weekend and exactly what we both needed after the stresses and anxieties surrounding the surgery.

Off back to London on Monday with the specialist very pleased with the job and willing to give us a 4 week reprieve from appointments and a gradual reduction in medications. You couldn’t wipe the smile from our faces. We also caught up with Chris and Sue, Michael and Kendra, and daughters Sam and Rose, and of course the very gorgeous baby Keira, for lunch at Harrow before returning by train home. And to make the day even better we got back to Kidsgrove where our boat was happily waiting for us and Malcolm had cooked us a lovely dinner!!! We are spoilt by our friends and family over here and we value them all for their unstinting support.

On Tuesday we had a busy day preparing our boat for the arrival of Bob’s sister Judy and her husband Ted, on Wednesday for a visit. This is the first time they have ventured over from Canada and we so hope it won’t be the last. They arrived on time by train and we trekked back to the boat with their very heavy suitcases – mostly filled with presents for us!!! Clothes and slippers and teabags (thanks Stuart!!) and scotch – just wonderful.

Julia arrived back an hour later from a quick trip back to Leicester to participate in a golf day celebration for one of her golfing girlfriend’s 90th birthday. By all accounts a brilliant time was had by all!!

We went to the Red Bull Inn for a meal that night with Judy and Ted and Malcolm and Julia, and as we expected they all got on extremely well. There was lots of talk about golf, and boating and all sorts.

Thursday morning was a sad day for us as we said farewell to Malcolm and Julia – they are heading back to their home mooring at Calcutt after being our cruising companions for the last 4 months – what a fantastic summer we have shared. We are not ashamed to say that a few tears were shed by all but I am sure we will be seeing them very soon and our friendship will be very long.

We moved off to cruise up the Macclesfield again as this is one of our favourite canals and we wanted to share it with Judy and Ted.  We tried not to exhaust them too much on their first day so only went as far as Ramsdell Hall with only the stop lock to contend with. They quickly understood why we love this life and this canal and an evening walk along the towpath revealed stunning views.

On Friday they were in for some fun. They were about to experience the 12 lock Bosley flight with windlasses in hand, cameras at the ready and plenty of energy!!! Despite a couple of wayward maneuverings by Bron we successfully conquered it, managed to back into access the services at the top of the flight and find a great mooring for the night. I think they were relieved that the locks were now behind them.

Judy made good use of the bow deck for cruising while Ted took a brief turn at the helm and kept Bob in line for much of the trip. We arrived in Macclesfield in the early afternoon of Saturday and after picking up water and mooring (with Bob taking a tumble into the edge of the canal – oops!!) we all headed off for a spot of supply gathering. Judy and Bron soon lost Ted and Bob and completed the hunting and gathering alone but based on an informed assumption found them enjoying the offerings of the Puss in Boots pub near to the mooring. Wasn’t hard to guess that’s where they would be!!!!

While Ted was with us he put his mind to solving a couple of little problems for us – fitting an extra shelf into a kitchen cupboard, sorting out patches for our covers where we have caught them on tunnels and bridges, creating a new hatch cover, solving the leaking of water into the engine bay through the covers and attempting to resolve the lack of seal around the shower alcove. Not all finished but at least the start has been made for which we are very appreciative!!!

After a marathon cooked breakfast on Sunday morning, Bob and Ted set off to check out the chandlery nearby but accidently found themselves in another pub. This time they called us and invited us to join them which we duly did before returning to Celtic Maid for Bob to cook an amazing roast lamb. Did I mention that we eat well??? And then we caught up with their son Philip and partner Sammy on skype in Vancouver, and our friend Max to make arrangements for him and Jenny to visit next weekend. We are busy and happily so!

Despite our best efforts to kidnap Judy and Ted we reluctantly put them on a train to their friends’ in Hemel Hempstead today. It has been a very enjoyable few days and are very much looking forward to seeing them in Australia in January and back here on Celtic Maid any time!

So we will have a few days to get some maintenance done before Max and Jenny arrive next Saturday.

Still loving life and living it to the full!![/vc_column_text][/vc_column][/vc_row][vc_row][vc_column][vc_gmaps link=”#E-8_JTNDaWZyYW1lJTIwc3JjJTNEJTIyaHR0cHMlM0ElMkYlMkZ3d3cuZ29vZ2xlLmNvbSUyRm1hcHMlMkZlbWJlZCUzRnBiJTNEJTIxMW0xOCUyMTFtMTIlMjExbTMlMjExZDM4MTg1LjM1OTQ5MjU5NTE3JTIxMmQtMi4xNjI3Mzk1OTk4ODIxNDMlMjEzZDUzLjI2MTEzNzc2OTk5MjY4NiUyMTJtMyUyMTFmMCUyMTJmMCUyMTNmMCUyMTNtMiUyMTFpMTAyNCUyMTJpNzY4JTIxNGYxMy4xJTIxM20zJTIxMW0yJTIxMXMweDQ4N2EzNjA4OTM2MjY3MTElMjUzQTB4YzFlMjY0OTI5ZjA3OGU5OSUyMTJzTWFjY2xlc2ZpZWxkJTI1MkMlMkJDaGVzaGlyZSUyQkVhc3QlMjUyQyUyQlVLJTIxNWUwJTIxM20yJTIxMXNlbiUyMTJzYXUlMjE0djE0NTg3Mjc1NTQ0NDclMjIlMjB3aWR0aCUzRCUyMjYwMCUyMiUyMGhlaWdodCUzRCUyMjQ1MCUyMiUyMGZyYW1lYm9yZGVyJTNEJTIyMCUyMiUyMHN0eWxlJTNEJTIyYm9yZGVyJTNBMCUyMiUyMGFsbG93ZnVsbHNjcmVlbiUzRSUzQyUyRmlmcmFtZSUzRQ==”][/vc_column][/vc_row]