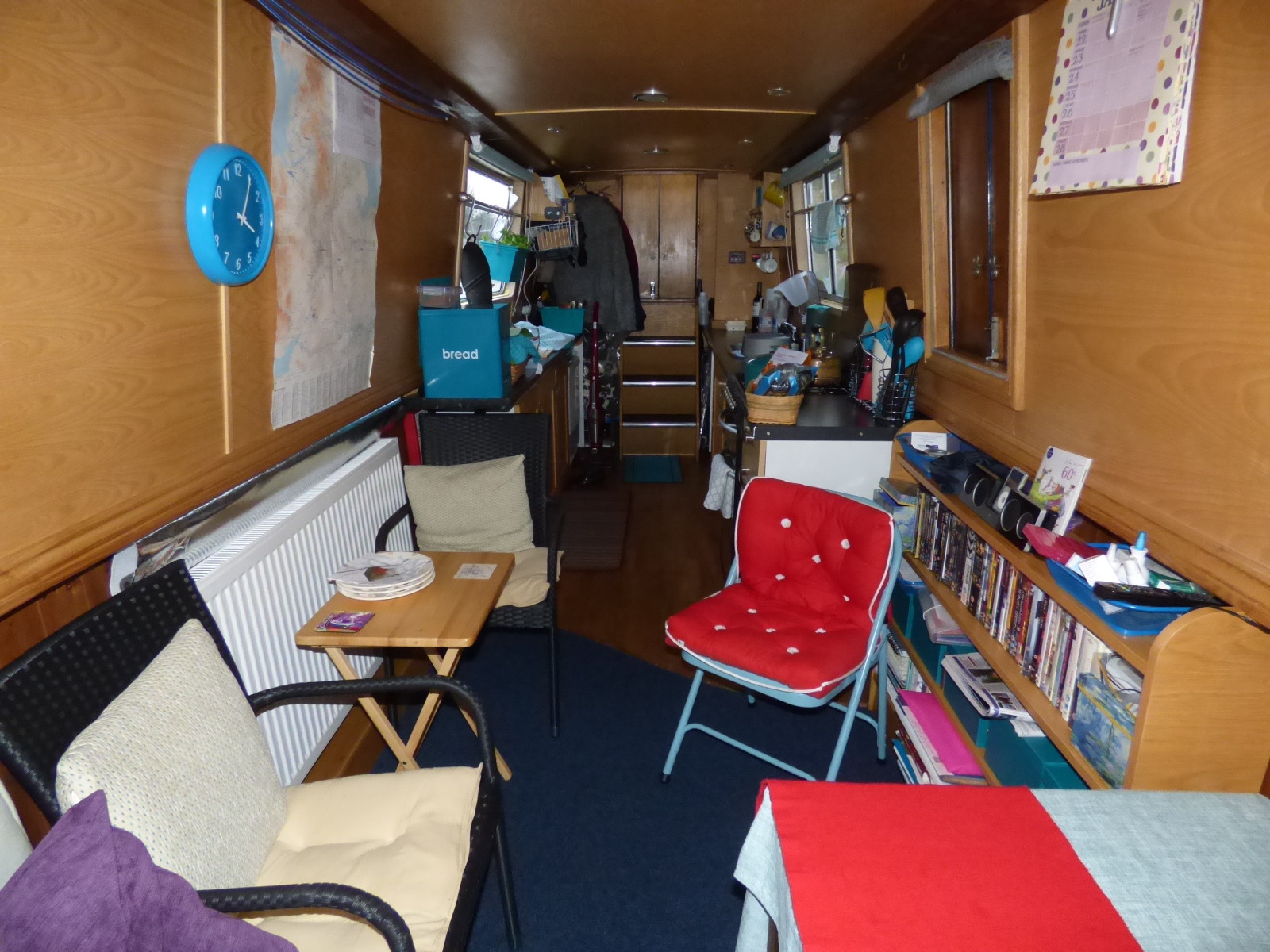 [vc_row][vc_column][vc_column_text]We are in the middle of winter aboard Celtic Maid, and have come to believe that it is necessary to semi-hibernate at this time. Given that for much of the month we only had 8-9 hours of daylight, the tendency to get up late and go to bed early is somewhat overwhelming. Despite this, we did achieve a few things over the month.

Our travels in January took us from Bradford on Avon in an easterly direction. We stopped in Hilperton overnight due to very high winds – we couldn’t even put up our rear pram cover until the winds eased in the evening. From there we cruised through Semington Locks and Seend Locks to moor at Sells Green at the foot of the Caen Hill lock flight at Devizes. With help, we went up the flight in bitingly cold weather and found very good moorings near the Devizes Wharf. Being close to water and refuse disposal, and the benefit of Jim’s car to get diesel and gas, we remained in Devizes close to shopping and facilities to get a few jobs done on Celtic Maid. The morning we left Bron managed to strain back muscles opening the hatch which laid her low for a few days.  As a result, the end of the month saw us at very muddy moorings at All Cannings where with the aid of rest, hot water bottles and medication she made a full recovery!

We are of course still travelling with Chris and Jim on NB Sylph, so a significant part of our time is dedicated to socialising – what a surprise. We also had the benefit of a visit from Michael and Jane from NB Moody Blues. They kindly agreed to drive down from their moorings in the Midlands to assist us to ascend the Caen Hill lock flight at Devizes. We had to celebrate their arrival of course and then our successful ascent. Altogether a brilliant weekend of merriment.

We also had a long happy hour with neighbours, Martyn and Margaret, as well as Jim and Chris while we were in Devizes. Its always good to get to know new people on the cut and share experiences and ideas.

Due to spending quite a long time in Devizes, we took the opportunity to spruce up Celtic Maid and ourselves. Both of us finally got haircuts – long overdue but very much appreciated. Celtic Maid got a new wig – well, new carpet laid. We saw the advantage in replacing the carpet in both the saloon and the bedroom as both were looking a little the worse for wear. Unfortunately, the new carpet tiles had to be laid over the old ones as despite the best efforts of Bob and Simon (the carpet layer) the glue previously used would not budge. But it is now very cosy underfoot even in this icy weather and looks neat.

This prompted us to tidy up a few other practical things such as the web of wires around our charging station, Myfi internet and radio. With the addition of an external antenna for the Myfi and a new UK power board, we have been able to get a very neat corner set up for all our charging requirements. And that includes the new power drill that Bob has finally purchased after talking about it for ages.

We are still waiting for a carpet runner for the kitchen and then the internal jobs are mostly done.

Our engine also got some TLC from Brendan – our Kiwi mechanic. Replacing the coolant hosing and drive plate has put Bob’s mind at rest for now. He continues to find things to worry about in his man cave – the engine bay!

Some stoppage time also provided the time to undertake some summer cruising planning. It looks like we are heading north and will take in a return trip along the Llangollen Canal into Wales, a trip into Chester, a scary passage across the Ribble Link to enjoy a month along the Lancaster Canal, and a return to the beautiful western section of the Leeds and Liverpool Canal to Skipton.

We are very excited and still have much to do before then. At least the daylight hours are getting longer.[/vc_column_text][vc_gmaps link=”#E-8_JTNDaWZyYW1lJTIwc3JjJTNEJTIyaHR0cHMlM0ElMkYlMkZ3d3cuZ29vZ2xlLmNvbSUyRm1hcHMlMkZlbWJlZCUzRnBiJTNEJTIxMW0xOCUyMTFtMTIlMjExbTMlMjExZDk5NjcuMDI1NzA1NTQ4MTAzJTIxMmQtMi4wMTQxNjYwMzQyOTg0NzczJTIxM2Q1MS4zNTIzODk0MTU4NzA2NCUyMTJtMyUyMTFmMCUyMTJmMCUyMTNmMCUyMTNtMiUyMTFpMTAyNCUyMTJpNzY4JTIxNGYxMy4xJTIxM20zJTIxMW0yJTIxMXMweDQ4NzE1ZmNlNDZhYTUwNWQlMjUzQTB4MTQwMjBmMjNjYjc2YWY0YSUyMTJzRGV2aXplcyUyMTVlMCUyMTNtMiUyMTFzZW4lMjEyc3VrJTIxNHYxNTE4NTMyOTgwNTQ5JTIyJTIwd2lkdGglM0QlMjI2MDAlMjIlMjBoZWlnaHQlM0QlMjI0NTAlMjIlMjBmcmFtZWJvcmRlciUzRCUyMjAlMjIlMjBzdHlsZSUzRCUyMmJvcmRlciUzQTAlMjIlMjBhbGxvd2Z1bGxzY3JlZW4lM0UlM0MlMkZpZnJhbWUlM0U=”][/vc_column][/vc_row]