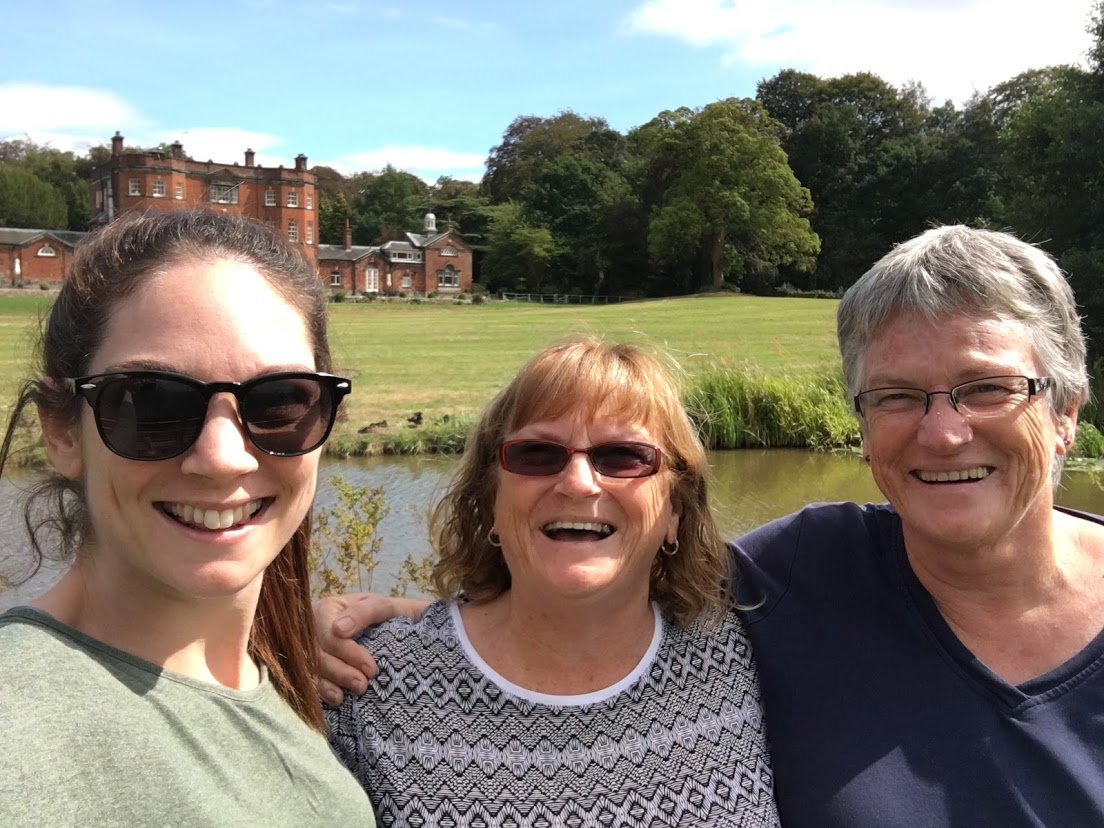 We followed up our summer holiday with more exciting adventures. The first visit by one of our children, Thaao, to Celtic Maid. The celebration of Bron’s 60th birthday. A trip to London and Paris for Bron as a tourist. So much excitement indeed.

Although we were coming to the end of our summer cruising we still had some miles to cover and canals to cruise. We left the marina at Rufford and followed the Leeds and Liverpool canal back to Plank Lane for a few days. Here we made our latest addition to Celtic Maid, and two of Malcolm and Julia’s grandchildren arrived to spend a week with them during their school break. Sadly we had to move on after just one day with them to reach Kidsgrove via the Bridgewater Canal and Dunham Massey Hall, along the Trent and Mersey Canal – mooring at Marston and Paddy’s Wood along the way, and arriving at Kidsgrove in time to catch up with Bron’s sister Yasha and her husband Juergen to celebrate their 25th wedding anniversary.

After a trip to London for treatment for Bob’s eye condition and to pick up precious cargo, and a day trip up the Macclesfield Canal with the family, we moved on through Harecastle tunnel and Stoke on Trent to moor in Barlaston near the Plume of Feathers hotel for birthday celebrations.

From here we headed south with a stop off in Stone, Burston and Salt before arriving in Great Haywood and onto the Staffordshire and Worcestershire Canal to stop at Tixall Wide for a week of maintenance.

Then it was down to Rugeley for washing, shopping and a trip to the dentist for Bob. Julia and Malcolm sadly left us here to make their return to their home moorings and the end of their summer cruising. We miss them very much.

Eventually, we arrived in Fradley Junction where we pause for breath before the next phase of cruising. Quite a busy few weeks we’ve had.

We were very excited to pick up our new top box storage kit once we returned from the Lancaster Canal. We had ordered it online and had it delivered to the Fettlers Wharf Marina where we moored both before and after our trip to the Lancaster Canal. Due to lack of time and space, it sat on our roof until we arrived a couple of days later at Plank Lane on the Leeds and Liverpool Canal.

Soon after arriving it was unpacked and Julia wisely kept Bron away while Bob and Malcolm undertook the assembly. That took about an hour and no arguments, rather than the much longer and more expressive alternative!

Once this stage was completed we let the boys help with the undercoating then sent them off to the pub while we did the final coats. The photos in the gallery show what a great job was done – must have been all the helpful comments of the gongoozlers as they wandered past us while we were hard at work.

We also took the opportunity to give our planks and pole a freshen up so the roof of Celtic Maid looks much more organised and tidy. That can all change though.

While Bron went off to London with her daughter and sister, and then Paris with cousin/friend, Julie, Bob stayed at Great Haywood to undertake some painting jobs. Julia supervised while Malcolm painted the gas locker in the bow and Bob painted the engine bay. Being a metal construction that lives in/on water it is vital to keep a step or two ahead of the rust spots and making the most of the downtime available to complete the task.

We were very excited to find out in late June that our daughter, Thaao, was planning a visit in August to coincide with Bron’s birthday. She is the first of our offspring to make the journey and we were very chuffed to meet her at Heathrow Airport. This was her first long-haul overseas trip and she held up well from the journey despite having left Adelaide with a very sore neck – not what you need for a long-haul flight.

Once reunited we took the Underground back into London and proceeded to wear her out even more while exposing her to Piccadilly Circus, the theatre district, Chinatown and her first pint and chips in a real English pub. All a bit surreal with jet lag. Eventually, we got her on the train back to Kidsgrove where she took a quick but necessary shower and then took advantage of collapsing into bed. Her goal for the visit was to “make a Thaao shaped indent in her bed (at other times our sofa), Thaao lip marks on a coffee cup and the same on a wine glass”. She was successful in these endeavours.

We think she might also have enjoyed the tea delivery in bed first up followed on several occasions by breakfast in situ. And of course a bit of Mumma and Bob cooking, the pub visits and finally understanding why we love this life.

She got to experience a bit of a cruise on the Macclesfield Canal (with Yasha and Juergen on board), a few locks where she helped a couple of times and videoed once, a tunnel – not her highlight, a couple of morning runs with Malcolm, a precarious roof walk atop a congested Celtic Maid, getting up close and personal with swans – sheer terror- and ducks, and seeing a squirrel for the first time.

At the end of her stay, we left Bob with work to do on Celtic Maid, while Bron, Yasha and Thaao went to London to be tourists.

We found a lovely little hotel just near Kings Cross Rail Station giving us easy access to the Underground to travel around. Highlights of the three action-packed days included dinner at Jamie Oliver’s first restaurant, “Fifteen” where the food was amazing; a tour around the London must-see spots aboard a hop on hop off bus, changing of the guards at Buckingham Palace, a river cruise along the Thames, crossing the Tower Bridge, a walk through Regent’s Park, shopping in Camden Markets and Oxford Street, breakfast in Covent Garden, a night out at the musical “Kinky Boots” and an afternoon at the cinema viewing “Mama Mia – Here We Go Again” again! We were all exhausted by the time Bron left for Paris, Thaao returned to Australia and Yasha got back to Juergen and their camper Bertita in Chester.

But we loved having her with us. Absolutely.

A big year for Bron as she turned 60 – just another day really. But we decided to invite a few of our closest friends to complement the party that included Thaao, Yasha and Juergen, to join us for lunch at the Plume of Feathers at Barlaston. This pub is co-owned by Neil Morrissey of the 90’s TV series “Men Behaving Badly” fame.

It was lovely to be joined by Sue and Chris (who provide us with huge support, love and a UK address), Julia and Malcolm (NB Figment and our co-adventurers for our recent summer holiday on the Lancaster Canal) , Jim and Chris (NB Sylph, great company and fellow travellers for lots of our time on the canals), and Julie and Phil (cousins and friends) as we celebrated the day. It was also a great opportunity for some of our closest family and friends to meet each other and finally understand who we have been talking about all this time.

Julie and Bron go to Paris

For the last year or so Bron and Julie have been talking about visiting Giverny in France, home to the artist Claude Monet’s gardens which are featured in many of his works. We decided to celebrate turning 60 this year by making the trip to Paris and taking the time to visit Giverny.

We arrived at the Gare Du Nord aboard the Eurostar and found our way to the Art Hotel Lafayette nearby. This put is in close proximity to some great restaurants and a pickup point for the hop on hop off bus tour of Paris. We chose to spend the Saturday on the bus stopping to explore the Plaza de la Concorde, Jardin Tuileries, Champs Elysees, Eiffel Tower, and to take a cruise along the River Seine. It was amazing just being there and seeing these iconic sites. Given the brevity of our stay, we knew that exploring the Louvre, Montmartre or Versailles was out of the question.

Our Sunday was devoted to a coach trip to Giverny and our long-awaited experience of Monet’s house and gardens. The lily ponds were particularly beautiful and peaceful and we could have sat and meandered here all day.  Well worth the trip if this had been all we had been able to see. Alas, our time there was too short but memories were made.

One of our discoveries in Paris was a lovely restaurant called La Maison Bleue. They had stunning food and the best gin and tonics anywhere. We returned every day of our stay and our favourite waiter brought our order straight away. We even tracked down the gin to enjoy at home.

On our last day, we walked to Galeries Lafayette – a seven-story department store of designer brands. What appealed to us was the view from the roof or terrace level over the city of Paris – just beautiful. Far more appealing than all the merchandise within.

Too soon our Paris sojourn was over and we returned to London for our last night, enjoying a brilliant Indian curry and Belgian breakfast before returning to our ordinary lives the following morning. A great celebration marking this life milestone.

Another busy few weeks but so enjoyable and full of excitement – we need a holiday!!!!!