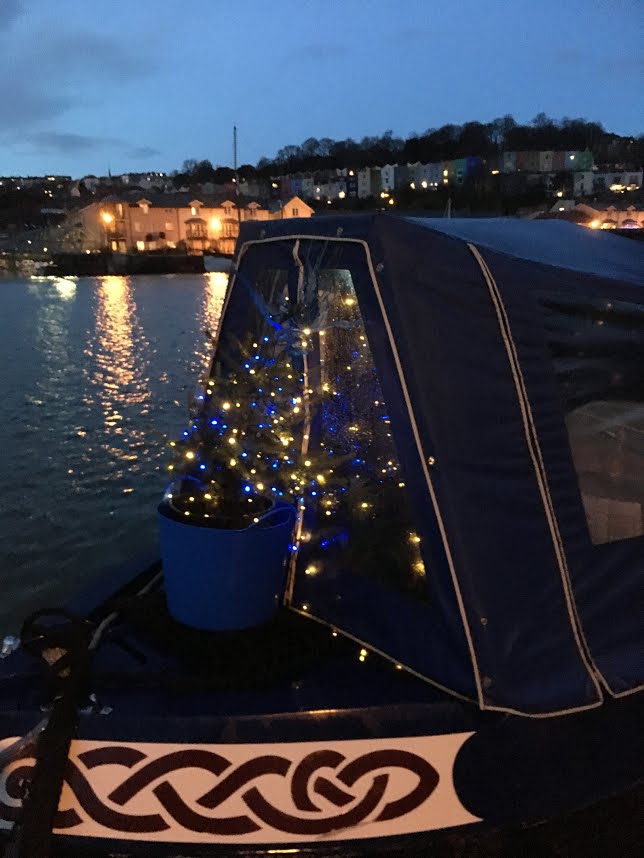 [vc_row][vc_column][vc_column_text]First and foremost we trust that our followers enjoyed happy holidays with family and friends and that not too many impossible to achieve New Year’s resolutions were made! Ours were quite simple: to continue to enjoy our life aboard NB Celtic Maid and to be open to new adventures.

Meanwhile, from Bradford on Avon, we ventured to Bristol and back but not everything went according to plan.

A great delight was catching up with friends Andy and Tracey, who had taken a widebeam to Europe soon after we met them almost 4 years ago. We are in the process of picking people’s brains about living aboard, abroad. They were only too willing to share their experience over a beverage or two and a nice meal. And have promised to make a return trip from nearby Swindon as we trek back along the Kennet and Avon. We are blessed to have met so many people willing to share their experiences for us to learn from.

Heading roughly west from Bradford on Avon, we travelled through some of the most picturesque parts of the canal as it follows the River Avon, overlooking it from halfway up the hillside. This is one of the experiences of canal boating that never ceases to amaze us. There are two aqueducts along this stretch at Dundas and Avoncliff. Not as stunning as the Pontcysyllte on the Llangollen Canal in Wales, but still offering a great vista of the Avon valley.

We were fortunate to get moorings just above the locks in Bath and prepared to descend the 6 locks and onto the River Avon. It had only recently been rated as green (safe to navigate) from amber (caution due to high or fast flows) and red (do not navigate – unsafe). There were not many moorings available along the River Avon but by squeezing in and double mooring between 2 boats that did not appear to have inhabitants, we managed to overnight about half way along, before embarking on the final leg into Bristol the next day.

One of the things we hadn’t checked on was the tides, as the River Avon is tidal from the Bristol Channel up as far as Hanham Lock. On the day we arrived, there had been a spring tide (very high tide) earlier and the Netham lock was still closed to traffic from the River Avon into the Bristol Floating Harbour. After a couple of calls to the Harbourmaster, we were finally let through and proceeded to navigate through the city and finally to moorings at Baltic Wharf. Although these did not have direct access to fresh water or any power it was a quiet spot, very close to a ferry stop for travel into the city shops, the Cottage Inn for refreshments, an Aldi supermarket for supplies, The Bristol Marina for diesel, water and laundry facilities and a parking spot for visitors. We were happy despite some misunderstandings with the authorities!!!!

Our first visitors were Jonathon and Mija, friends we had met through Jim and Chris, who had trained at the Bristol Old Vic Theatre and proposed to take us to a first-year students production of The Wizard of Oz. We had a fabulous night and were thoroughly entertained. Jonathon also drove us to see the Clifton Suspension Bridge, a massively impressive landmark structure, especially when lit up at night.

Too soon they left us and we had a few days to explore the city – and get some Christmas shopping done – and to visit the SS Great Britain engineered by Isambard Kingdom Brunel, who also designed the Clifton Suspension Bridge and the Great Western Railway. The steamship itself is pretty spectacular being the first of its kind and is now in a dry dock exactly where it was built in Bristol. We spent about four hours looking all over it, including going below the water to view the hull which is kept in dry warm conditions rather ingeniously, and also through the attached museum. There is a link to Australia as the ship took gold prospectors to Australia during one of its phases of operation. Very well worth the visit and entry fee!

We also had a lovely break away from Celtic Maid when we were picked up by Julie and Phil and taken to a lovely little village called Colerne for a little holiday together.   Despite being a small village it had two pubs and we sampled the offerings in both as well as Bob and Phil cooking for us one night after picking up supplies in nearby Bath. The time was up far too soon and they took us to London and dropped us off at Bob’s eye appointment (all was good). From there we travelled to Baldock for a couple of days visit with friends Chris and Sue. After opening a massive pile of mail and catching up on news we settled down to relax and help them prepare meals for their Christmas trip to Cornwall. They kindly dropped us back to Celtic Maid on their way to the south-west and by all accounts, the meal was a success.

Our arrival back in Bristol coincided with a visit from the Harbourmaster who confirmed that our extended stay in the harbour (due to the River Avon being classified as red again) was coming to a close and they would facilitate our leaving the following morning. I think we were all a bit excited to be on the move again, despite enjoying Bristol and all it had to offer.

We were well pleased to get back up the River Avon to Bath without incident even though the river was still on amber alert. It was clear that the flows had been higher and faster, and we were thankful to be off it after a stop off for supplies at Sainsbury’s. Then it was back up the Bath Locks and a couple of days to enjoy Bath and Christmas celebrations together. And the all-important skype catch ups with family and friends in Australia. Then along to Bathampton to await the arrival of Jim and Chris’s family – their daughter Cassy and grandsons, Jacob and Dylan – who were coming to bring in the New Year with us. A quick trip back to Bath so the boys could have a look around and then to find quiet rural moorings that we could make noisy with fireworks on New Year’s Eve. Despite the rain, the night was a great success and although we were asleep by midnight we all felt we did the occasion justice.

All too soon we were back in Bradford on Avon again and picked up moorings where we were a short month before.

2018 has only just begun and we are knee deep in planning for this year and all that it offers.