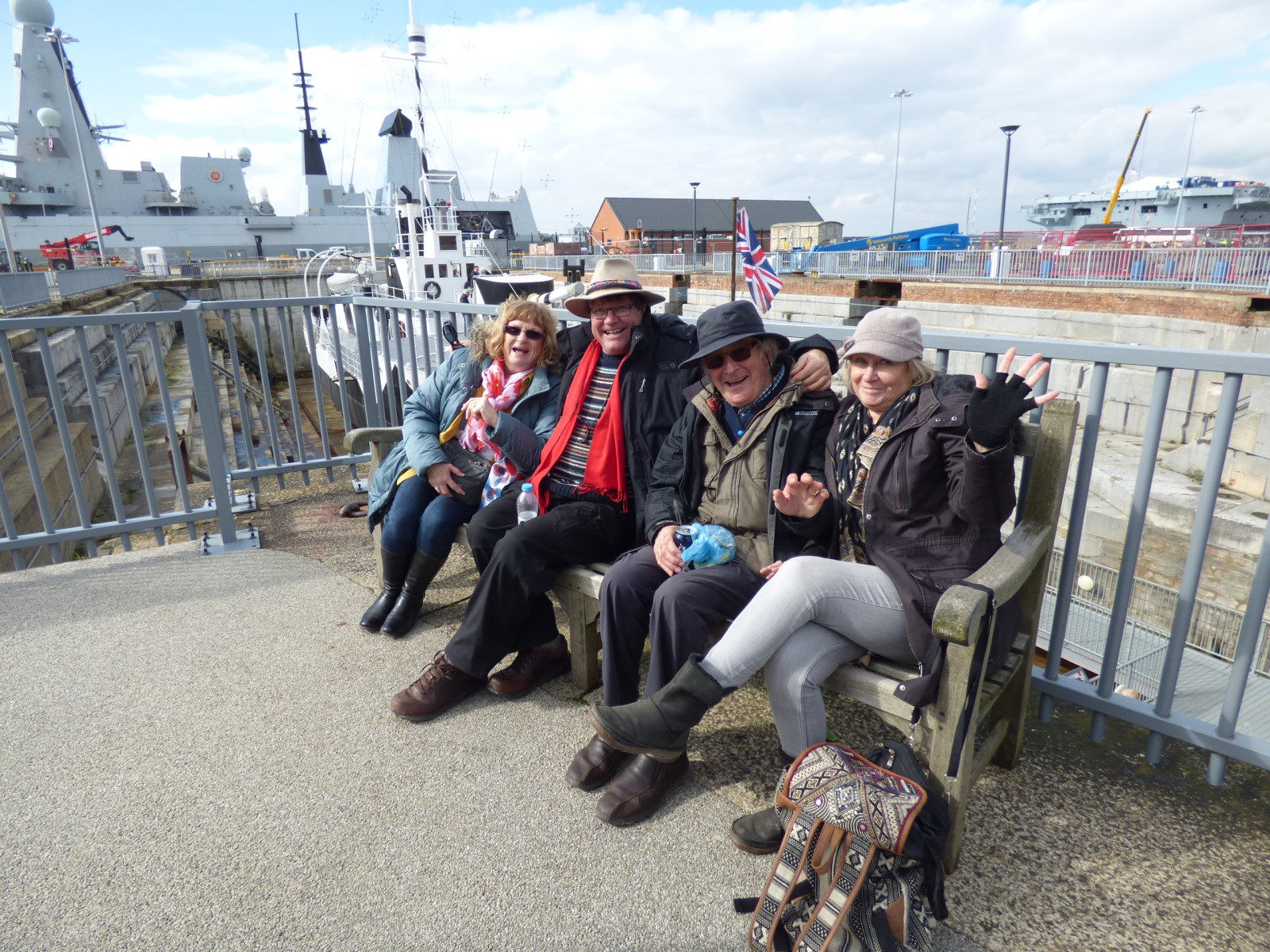 After being snowed in by another “Beast from the East” cold burst, we finally made it from Great Bedwyn to Newbury – a very modest journey of 14 miles and 21 locks. And of course a number of swing bridges that are common along the Kennet and Avon Canal. Along the way, we spent a short time in both Hungerford and Kintbury, availing ourselves of both boating and shopping facilities, and enabling our engineer, Brendon, to complete works on both Celtic Maid and Sylph.

However, we are now stuck in Newbury awaiting the abatement of high flows on both the Kennet and Thames rivers before we can get off the canal and travel to the Oxford Canal. We are rather cautious of overstaying our welcome given that we have already received one courteous email from the Canal and River Trust encouraging us to move on from our extended stay in Great Bedwyn!

Whilst waiting in Great Bedwyn for boat repairs to be undertaken we made the decision to put our Tesco Clubcard points to good use and travel to Portsmouth to visit the dockyard museum there. With the help of Chris and Jim, we got online and converted our points to vouchers for entry to the Portsmouth Historic Dockyard and accommodation at The Cricketer’s Inn at nearby Steep. This made for a very cheap but rather interesting side trip for us.

Among the many things to do at Portsmouth Historic Dockyard, we chose to look over HMS Warrior 1860, Britain’s first iron-clad ship; HMS Victory, the ship that played such an important role for Vice Admiral Nelson at Trafalgar; HMS M33, Gallipoli’s only surviving ship from WW1 and known as the “lucky ship” as it had no casualties throughout the campaign; and the new exhibit of the Mary Rose, a ship of King Henry VIII that lay on the seabed for over 500 years after sinking in battle in 1545, and being raised in 1982, finally at rest in the dock in which she was built.

We also took a cruise around the harbour to see the vast expanse of docks, variety of ships and ferries that use the port, and the very new aircraft carrier HMS Queen Elizabeth that is currently undergoing sea trials. Absolutely fascinating commentary augmented the cruise and having a rare sunny day for the experienced certainly lifted our spirits.

Our accommodations at the Cricketer’s Inn were very nice and our dinner of pizza, salad, and dessert (for Chris and Bron) all washed down with a selection of beer, wine, and cider made for a pleasant evening.

The next day we traveled home via a shopping stopover in Winchester and a quick look at the famous cathedral. A very enjoyable time was had by all and we thank Jim for driving us there.

There is always something to do on board and long winters seem to be the time to get them done.

Bob now seems happier with the engine bay – Brendon has fixed the cooling system, fitted new engine mounts that have alleviated the vibration, and repaired the throttle cable. All this has made her so much easier to drive and Bob feels more confident too.

Inside the cabin, we have finally repaired the ceiling which had dropped slightly when the glue holding it to the batons gave way a few months ago. After consultations with David and Ted, both of whom had stayed aboard with us last year and have extensive carpentry experience, we have inserted rows of brass screws which have sorted out the problem perfectly!!! Bob’s new drill came in very handy.

While we were on a roll, we decided to install some shelving in the galley and cabin area. A quick trip to the Newbury B&Q (hardware store for those not in the UK), and we had all we needed to do the job. They look pretty good and have tidied up these areas very well.

Pretty much all of our plans for the next few months have had to change given the delays we have and are experiencing due to the weather, river conditions, canal closures and mechanical repairs.

We will be heading to Reading and off the Kennet and Avon Canal as soon as it is safe, heading north up the Thames to Oxford and from there up the Oxford Canal. Other than needing to make it to Tarleton by late June for our Ribble Link crossing onto the Lancaster Canal, we are unsure of what is happening. But then again, isn’t that the nature of boating …. and being happily retired???