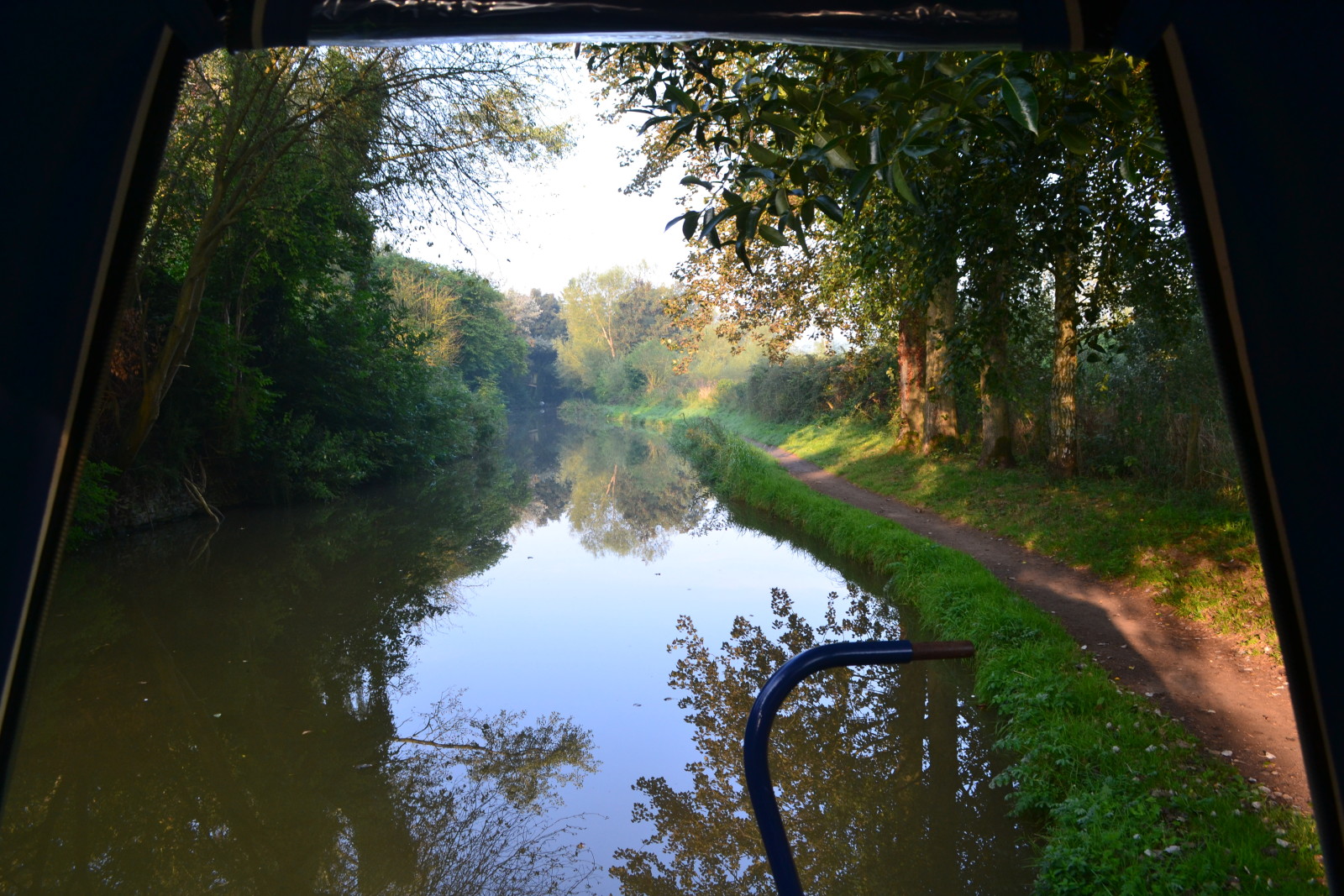 [vc_row][vc_column][vc_column_text]What a busy and thoroughly enjoyable month September was. Only now as we rest for a couple of days at the top of the Hatton Lock Flight on the Grand Union Canal, can we stop for a short time to catch our breath and reflect on the month that was.

After our first visitors (Julie and Phil) left us and we relocated to Thrupp, we prepared for Bob to have his third, and we hope final, surgery on his eye. This time to remove the suture from inside his shunt to keep the eye pressure at a good level. The good news, of course, was that this coincided with a catch up with Mick, Kendra and Rose from the USA visiting Sue and Chris in London. So we travelled on Thursday to Edgware and caught up on all the news before heading off to Northwick Park Hospital early Friday morning. Everything was going well until the theatre experienced a power failure! Not a huge issue but without a UPS available all surgery was cancelled eventually. However, given that Bob’s was minor and he is a brave soul, they performed it in the consulting room very successfully. The eye pressure immediately dropped and stabilised within an hour to a good, controlled level. Can’t thank the staff enough for the calm and measured way they handled everyone and rescheduled appointments, ensuring minimal distress to all.

Chris and Sue had kindly dropped us off and picked us up again so we returned to their home and awaited the USA gang to come for dinner. Another great night was had by all and we planned a trip to visit Liz at Buckingham Palace on Saturday. Despite the rain, it was a very enjoyable day with one minor mishap – I misplaced my Oyster Card just as we were getting onto the Underground for our trip home! So I bought a new one and once they calmed me down I found it – right in the place I had stored it!!! Not sure what happened there but I am still apologising to the general public for the frustrated display and language they all had to endure!!!!

After a restful day on Sunday (Mick, Kendra and Rose headed off to Scotland while the rest of us chilled out) we returned to the hospital on Monday for a check up (all very positive) before returning back to Oxford where we were met at the station by Max and Jenny who had come to visit for a couple of days. Once the supplies were in we quickly settled into the routine for the next couple of days – eating, drinking, chatting, relaxing and a little cruising up to Lower Heyford. The weather Gods were with us and we enjoyed a spectacular evening BBQ outside followed by a fireside chat. So sad to see them leave on Wednesday after a flying visit but we hope the next one can be for a little longer.

Jim and Chris on NB Sylph had gone on ahead of us to get some work done so we set off on Thursday to meet up with them by the following Monday in Banbury. There being no rush, we enjoyed the beautiful rural scenery of the Oxford canal as we slowly made progress. And it gave us a chance to get Celtic Maid shipshape for the impending visit by Bob’s sister, Judy, and her husband Ted from Canada on Tuesday.

Banbury is a large centre and we took advantage of the availability of shopping to get a few things to make our life more comfortable. But of major importance was the purchase of three new blinds from Dunelm for the galley and lounge area and, after much research (and at Max’s suggestion) a kit drawer unit for the kitchen from Wickes. These purchases were made only after Judy assured us that Ted wanted to be very busy whilst aboard. And he sure was…..

They arrived Tuesday afternoon having made excellent time from the airport via coach and train. Ted smiled as we broke the news to him of both the 45 locks over 35 miles that we were going to cover, and his construction duties. But we had carefully staged progress with a visit to a pub every day in the afternoon to sample the English ales so bribery won him over.

Once we had all our purchases aboard (and ample supplies of refreshments!!), we set off on Wednesday for Cropredy where we not only met up briefly with Julia and Malcolm on NB Figment but also the Hoskins crew (Mick and Kendra and Rose and Chris and Sue) who met us at the Brasenose Arms for dinner. If the other diners at this pub were hopeful of a quiet dinner we certainly didn’t let them. A fantastic night was had by all and we were sad to bid them a very fond farewell – until next time.

Our next stop was Fenny Compton. Somehow Figment and Sylph had taken off much earlier than us and had managed to have lunchtime drinks in the Wharf Inn before we arrived. How rude!! But after arranging to have dinner aboard Figment that night, we headed off for a swift pint or two. (Meanwhile, progress had been made on installation of the blinds).

The hospitality aboard Figment was great as always and after much fun and laughter, and too much food we settled for a good night’s sleep and a shorter trip to a lovely rural mooring the next day. The view from here was brilliant and Sylph finally caught up with us after Jim and Bob and gone back to Banbury with Kim (Jim and Chris’s daughter who had been staying with them for a couple of days) to move Jim’s car and order a piece of glass for our window which had mysteriously leapt to its demise in the canal the day before!!! No names will be mentioned. We had enjoyed a lovely happy hour with Figment by the time they arrived and since it was getting dark we all retired to our respective boats.

We said goodbye to Julia and Malcolm on Saturday and headed for the Napton lock flight. Judy, Chris and I decided to walk the four miles picking blackberries along the way. By the time we started to descend the flight the wind had picked up and it became tricky work. But we got there and found moorings quickly so that we could sample the delights of The Folly Inn.  And yes, you have all guessed correctly – this has been a carefully planned pub crawl!!! (By now the blinds were up and we were well into the construction phase of the drawer unit!!)

Sunday saw us turn off of the Oxford canal at the Napton Junction onto the Grand Union again, heading for Leamington Spa by Monday to bid farewell to our guests on the train on Tuesday. But not before we stopped another night and they all went down to The Two Boats Inn atLong Itchington, to see if the standard of pubs was up to scratch. Apparently, it was. And before we knew it we were moored in Leamington Spa, the miles and locks were covered, the blinds and drawers were done and beautiful and it was time to say goodbye. But I have it on good authority that Ted has instituted regular happy hours into his daily routine and is busily planning both his retirement (at last) and an extended visit next year. We promise – no more building work!!

And so, back just with Jim and Chris on Sylph, we made our way through Warwick, shopping (again) and then conquered the 21 lock Hatton flight. We finally arrived at a mooring very near Hatton and have had a couple of days catching up on general maintenance, blog and sleep. If that was September, what will October bring???