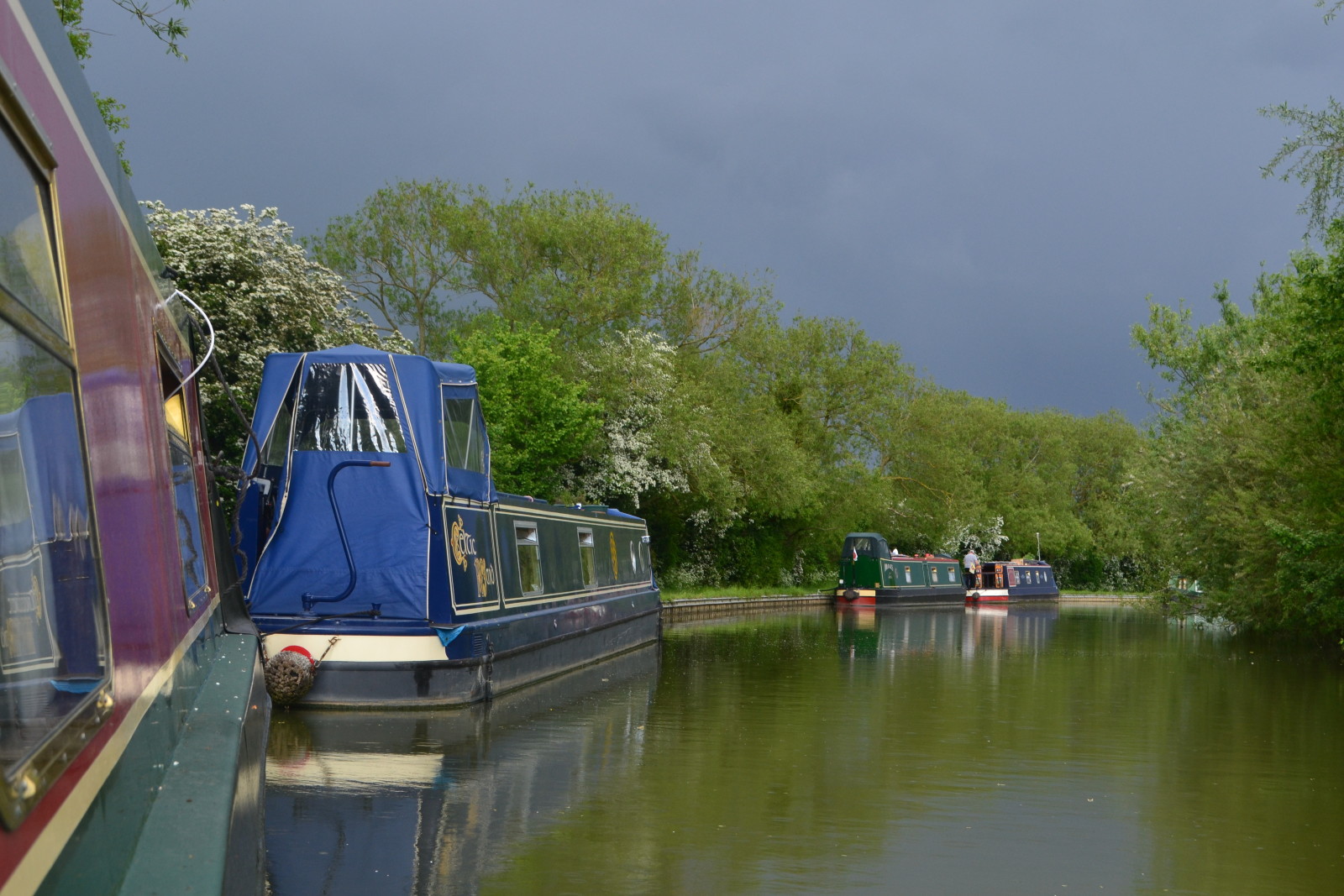 [vc_row][vc_column][vc_column_text]With the decision made to head towards London we prepared ourselves to tackle going up the Northampton flight of 17 locks. But not before an early morning wake up with Jim letting us know they were off to the hospital to get Chris’s hand checked out. She had attempted to save a cat from the river in the wee small hours,and it both bitten and scratched her.  Happy to report the health system treated her promptly and the hand is now on the mend.

Our progress up the lock was hampered by both said injury and a fellow solo traveller who was making very slow but necessary progress up the flight to have his alternator repaired. After a few delays we negotiated to go ahead, preparing each lock for him before we moved on to assist him to keep moving. We finally made it to the top, availed ourselves of the service point facilities and moved onto the main line of the Grand Union Canal.

We all lamented our postponement of exploring the waterways to Cambridge but also all agree that it was the right decision.

After a leisurely cruise through the Blisworth tunnel, stop off to check out the beautiful works at Ark Stained Glass, and a meander down the 7 Stoke Bruerne locks we picked up beautiful moorings just outside Yardley Gobion on Saturday night. The sheep, geese and ducks were certainly enjoying the lush green grasses to be found in the fields on both sides of the canal.

On Sunday we set our sights for Wolverton, needing a mooring to catch the train to London on Monday for another eye check up.  We only found space for one, so Chris and Jim kept moving and we arranged to catch them up once we returned on Monday afternoon. Fortunately, the news about the eye was positive, so we returned in good spirits on Monday and quickly covered the 2 miles (well quickly for a Narrowboat!) to catch up to NB Sylph.

We made the decision to move on Tuesday to Campbell Park which has very good visitor moorings next to a large park giving lots of room for Gina and Bunion to have a good run. Didn’t hurt the rest of us to take a few walks and investigate all that the park has to offer, either. The cricket pitch alone made us want to take up the sport.

The city of Milton Keynes is not necessarily a place you would put on your travel bucket list. But there are a number of places, whilst cruising through, to moor up and take a walk to investigate. Often you would think you were in the countryside rather than going through a city. The views from a canal are so different than by car!!

Just a short walk from our moorings in Campbell Park is a lovely vegetarian cafe and shop run by Camphill communities that support adults with learning difficulties to live and work as independently as possible within the community. Well worth a visit for excellent coffee and service, as well as a browse through their shop with fresh baked bread, assorted condiments and ingredients, as well as all sorts of crafts, jewellery, cards and baskets. Celtic Maid are now the proud owners of a lovely bread basket!!

In anticipation of the arrival of Kim – Jim and Chris’s daughter – on Friday night, we relocated to Fenny Stratford on Thursday to avail ourselves of nearby shopping and laundry. Jim also took this opportunity to play car shuffle – picking up the faithful Volvo from one location and strategically securing it at a new one in anticipation of our collective non-boating travel needs. We ended up staying here until we moved today, with Jim and Bob relocating the car again while awaiting Kim’s return from London later in the day.

So we are now moored only about a half a mile further on hoping that a safe return by the intrepid travellers and better weather tomorrow may get us to the Globe Inn near Linslade where we shall have a fine repast and much merriment, me thinks!!!!!

Oh and a big happy 84th birthday to Bron’s Mum for today. And a whole big bunch of love xxxxx[/vc_column_text][/vc_column][/vc_row][vc_row][vc_column][vc_gmaps link=”#E-8_JTNDaWZyYW1lJTIwc3JjJTNEJTIyaHR0cHMlM0ElMkYlMkZ3d3cuZ29vZ2xlLmNvbSUyRm1hcHMlMkZlbWJlZCUzRnBiJTNEJTIxMW0xOCUyMTFtMTIlMjExbTMlMjExZDQ5MDcuNzUxNzMwOTE4MTE3JTIxMmQtMC43NDUyNTQ0MDEzNjU1OTU2JTIxM2Q1Mi4wNDU1NzM3NTI1MjY4MSUyMTJtMyUyMTFmMCUyMTJmMCUyMTNmMCUyMTNtMiUyMTFpMTAyNCUyMTJpNzY4JTIxNGYxMy4xJTIxM20zJTIxMW0yJTIxMXMweDQ4NzdhYTU0ZDJmMzAzN2QlMjUzQTB4MzJmYzYxZjljMjRjODQ5JTIxMnNDYW1wYmVsbCUyQlBhcmslMjUyQyUyQk1pbHRvbiUyQktleW5lcyUyMTVlMCUyMTNtMiUyMTFzZW4lMjEyc3VrJTIxNHYxNDY0NjE4MjUyMDU1JTIyJTIwd2lkdGglM0QlMjI2MDAlMjIlMjBoZWlnaHQlM0QlMjI0NTAlMjIlMjBmcmFtZWJvcmRlciUzRCUyMjAlMjIlMjBzdHlsZSUzRCUyMmJvcmRlciUzQTAlMjIlMjBhbGxvd2Z1bGxzY3JlZW4lM0UlM0MlMkZpZnJhbWUlM0U=”][/vc_column][/vc_row]