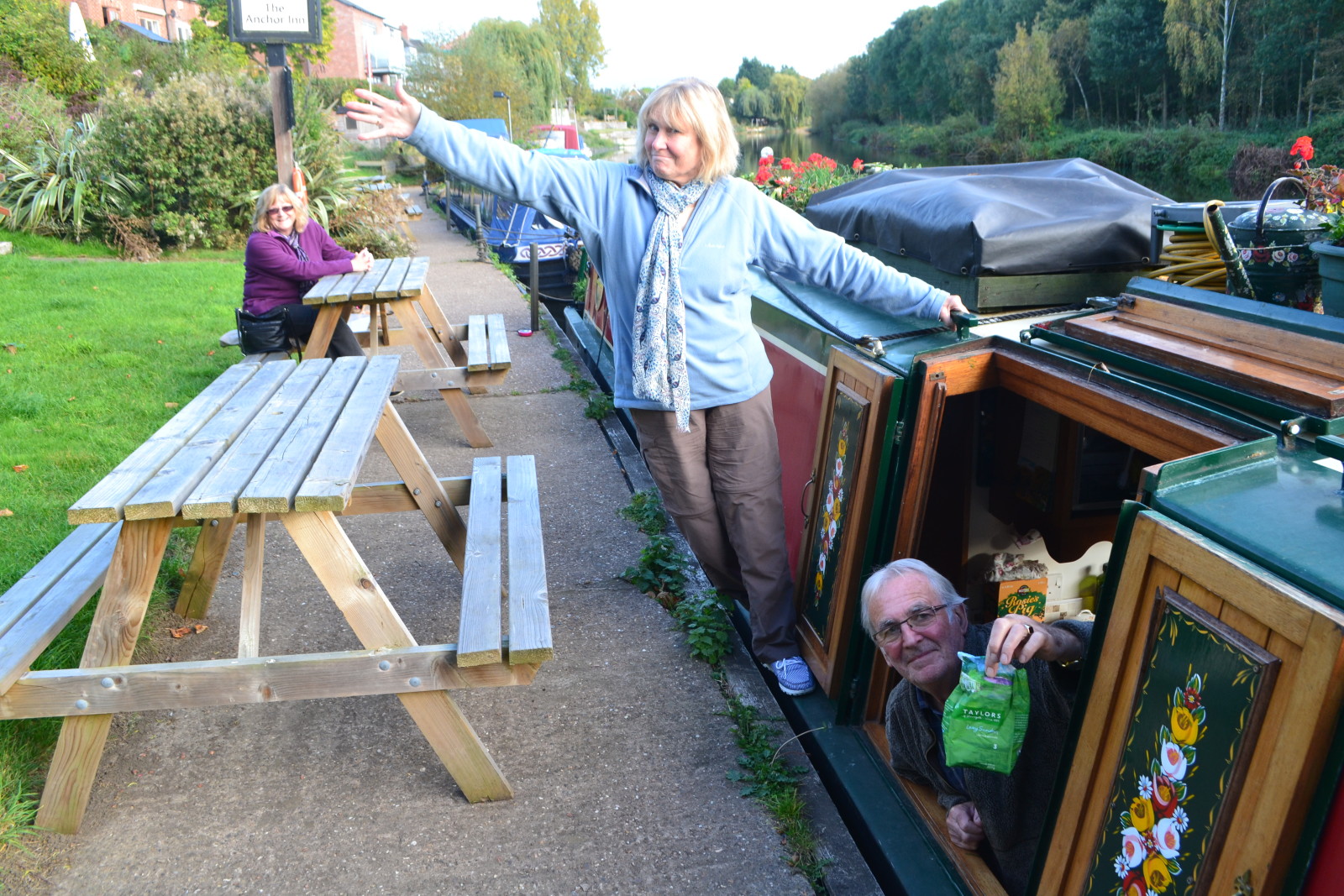 October has now come to an end, Autumn is in full swing, our clocks have gone back an hour and we’ve covered the most waterways in any blog yet!!!!

We are now comfortably moored on the Gloucester and Sharpness Canal near Rea Bridge, still traveling with NB Sylph and enjoying new waterways. The past month has gone by fast, but with the cooler weather and much shorter days we are now slowing down in anticipation of winter.

We passed through Kingswood Junction onto the Stratford-on-Avon Canal enjoying the new sights, narrow locks and interesting architecture. The barrel roof cottages beside the locks are just beautiful. First stop was Lowsonford where we enjoyed the hospitality of The Fleur-de-Lys pub. Very pleasant atmosphere and refreshments. It might sound as if we are on a giant pub crawl but we do have to put something into the local economy!!!

This canal runs through some very rural environments and certainly fills your soul with its peace and tranquility. The small towns are welcoming and historic and great to wander around. St Peter’s Church at Wootten Wawen, our next stop, was well worth the visit with some very interesting history of both the church and its environs on display. There is also a great farm shop,craft centre and retail shops offering all manner of interesting things just a short walk from the canal. A new hat and short wellies have been a very welcome and much-needed addition to the cruising wardrobe!!

Getting diesel at the marina whilst perched on the aqueduct over the A34 road is an interesting experience, but was really only a practice run for the Edstone Aqueduct which we crossed just over a mile later. Nowhere near as high or long as the famous Pontcysyllte Aqueduct on the Llangollen Canal in Wales, this one is still challenging as it crosses over both a road and railway in the valley below.

Mooring at Wilmcote, we took advantage of the close proximity of Chris and Jim’s car and did a run to Stratford-on-Avon to catch up on some washing. Despite having our twin tub, it is sometimes a bit of a treat getting the washing and drying finished on the one day. Not a cheap exercise though!!!

After dropping down the 11 Wilmcote locks we moored in Stratford-on-Avon the next day (Saturday) to take advantage of the nearby supermarket and get in much-needed supplies. Unfortunately, the moorings were opposite the Golden Arches and beside a motel so the noise level on a Saturday night was just a tad too high for restful sleep.

But we headed bravely into Bancroft Basin right in the centre of Stratford-on-Avon on Sunday morning and got onto a great pontoon mooring opposite the Royal Shakespeare Theatre. The market was there in the basin and we took the opportunity to have a look around the area, blending in with all the Sunday sightseers.

We had several interesting and enjoyable experiences whilst in Stratford-on-Avon. First the annual “Mop festival”. All of the high street and surrounds are blocked off and all manner of rides and stalls take over the town. This event has its roots in the era when people of all trades and skills would gather to get hired for the next year, carrying a symbol of their specialty area. So the maids would carry mops, field workers may carry a rake and so on. They also had the opportunity 10 days later to gather again to be rehired if they didn’t like their first placement!. The current festival is more of an opportunity for ride operators to assist members of the public to part with their money thus keeping one sector of the economy working.

Another, of course, is that this is William Shakespeare’s birthplace and much is made of the cottage in which he was born, where he lived, his mother and wife and so on. This, of course, brings many tourists from around the world and their money so the coffers of this great town are being filled, securing a robust future.

We also had some health appointments in London resulting in Bob being discharged from one of his eye clinics. And as we returned to the boat from the train station at 11.00pm we waded our way through the detritus of the Mop Festival back to our boat. So we saw a little of the hangover from the festival.

And we had a short but brilliant visit from Bronwyn and Peter Forward (Bob worked with Peter previously) who were traveling through the UK visiting sites of engineering significance and medical friends of Bronwyn’s from her time here. I don’t think any of us were quiet for the four short hours we had together discussing aged care, health, rail and canal engineering, 4wheel driving, conservation volunteering and anything else that cropped up. A great time was had by all.

We left the basin on Saturday morning, descending through the lock to the Avon River with a very large entourage of gongoozlers (spectators) observing our every move. We moored adjacent to the last working chain ferry in England, which carried foot passengers across the Avon with the captain turning a wheel which propelled the vessel along the chain connecting both sides of the river. Intriguing.

On Tuesday we finally started cruising the River Avon, enjoying its width and narrowness, twists and turns, and stunning views of the rural landscape.There are locks on this river which are large enough for both our narrowboats to navigate, but they are accompanied by weirs which must be avoided at all costs. These are well marked and blocked by large buoys but one can imagine the danger in trying to navigate when the water is high and flowing fast. Of course, one should be safely moored up then!

Another major difference in being on a river is the scarcity of moorings. Unfortunately, these are usually right outside a pub or in the middle of a town necessitating an investment of some type into the local economy. We do our best. Enough said.

So our first mooring was right by the Fish and Anchor Inn necessitating a visit to pay our respects to the landlord/lady and our dues to the barkeeper. A couple of pints usually hits the spot.

Our next stop was Evesham, which has a lovely stretch of riverfront flanked by beautifully kept gardens and a reasonable high street not too long a walk away. The town itself is not exciting but our stay was picturesque and uneventful, thankfully. Upon leaving the following morning we finally availed ourselves of the very well hidden water point (in an unmarked wooden box requiring the usual BW key). Following the long U-shape of the river we made our way to lovely moorings at Craycombe Turn – just enough room for 2 narrowboats (once we had chased off the 3 fishermen in their plastic boat). As the weather was calm and mild (we certainly had very mild weather for October), we decided to have our happy hour on the bank. As darkness fell early we made our way back inside but were happy we had been able to have one last sit in the great outdoors this year.

As we neared the interestingly named village of Wyre Piddle the following day, we noticed a drone hovering overhead. When we moored up by The Anchor Inn, the operators of the drone, Paul Bell and his sons, arrived and shared the video they had taken with us. Very different view of our activities. The Anchor Inn also serves just about the best egg and chips around – rosemary on the chips!

A short trip to the Georgian town of Pershore for an aborted attempt to use the laundrette – we arrived at 1.00pm on Saturday and they close at noon. So what else to do but meander around the shops and find a good pub for lunch on Sunday. Chris’s school friend, Marion, came with her partner Andrew on Sunday and we had earmarked The Angel Inn for a nice roast lunch. All turned out to be a lovely time for us all – it is so good to meet more of our friend’s friends.

Another short hop on Monday to Comberton Quay. Again just the space for two boats and a quick walk up the hill to the village to check out the library/book exchange in the phone box! Great idea and I believe there are a few around the country now. We also picked some blackberries (this is the last of the crop) and windfall apples. Chris knocked on our window a little later to deliver stewed apples and blackberries with custard. Just lovely!!

After availing ourselves of the lovely services at Tewkesbury Marina – they really are a most polite and helpful lot – we headed to the moorings just before the lock. Gina, Chris and Jim’s dog, had recently had surgery and they have had to take a few trips back to Warwick for follow-up care. This mooring was convenient to the town centre and for their car. It also had no signs up in regards to any mooring fees payable. All went well until we were in the lock on Friday morning to drop down onto the River Severn and the lockkeeper “requested” the required fee of £3 per night. Despite our protestations we were captive in the lock until payment was made so we finally succumbed.

The River Severn is different again. It may have been the weather but it has an almost sinister feel. There is clearly a current and a few days earlier there had been a spring tide. This part of the river is not tidal except on these high tides coinciding with full moons. Evidence of it could be seen along the edges where the river level appeared to have recently dropped and much more obviously when we moored up at Ashleworth Boat Inn. The deck was completely covered by about an inch of clay which was slowly drying but still very sticky and slippery. After carefully mooring together, the publican came down to apologise for the mud which they usually leave to dry and then sweep off. He then produced a rope tied at the top of the bank to assist us in making the slippery steep climb up to the pub. After a light lunch and liquid refreshments, Bob borrowed a shovel and cleared a path to the mooring and along the deck while the rest of us set off to explore the huge Tithe Barn, cemetery and very old buildings in the small village behind the pub. We returned to find Bob chatting to other patrons and lubricating his throat. On the upside, they served 18 different types of cider on tap – Chris and I thought we were in heaven!

We made an early start the next morning to get through the Gloucester Lock and up into the docks in readiness for our journey along the Gloucester and Sharpness Canal. It is a little treacherous getting into this lock unless you call the lockkeeper beforehand so that he can prepare and open it for your arrival. Otherwise, it is a bit of hit and miss trying to secure to chains along a very high wall. We got through easily and were moored up in the beautifully restored docks by 10.00am – quite an achievement.

We availed ourselves to a little shopping here before heading off on Monday to moor near Chris and Jim at Rea Bridge, stopping along the way to make arrangements for our Celtic Maid to be fitted with a hospital exhaust by the end of this week. Apparently, we won’t know ourselves with how quiet she will be.

Safely moored on a quiet stretch we settled to catch up on a few jobs, get in supplies and enjoy the rest for a few days.

And on rolls November………